Syrians registered as refugees equivalent to combined population of Connacht, Clare and Kerry

Migrant families wait to be registered by the police at the Lesbos port in Greece. Photograph: Angelos tzortzinis/AFP/Getty Images

The number of Syrian people registered as refugees at the end of August was equivalent to the population of the State bar Cork city and county at the time of the last census.

Figures compiled by the United Nations High Commission for Refugees (UNHCR) and the Turkish government show the number of Syrians who have sought refuge in Turkey, Iraq, Lebanon, Jordan, and north Africa stoodwas 4.1 million as of August 25th.

The number of Syrian refugees registered in the region now stands at 17.5 per cent of Syria’s 2014 population.

In an Irish context this is equivalent to the combined 2011 population of Connacht, Clare and Kerry.

On top of this, 7.6 million people are estimated to be displaced within Syria, about a third of its total population.

If the same proportion of people were displaced within Ireland, it would be equivalent to the combined population of Munster, Kilkenny and Wexford. 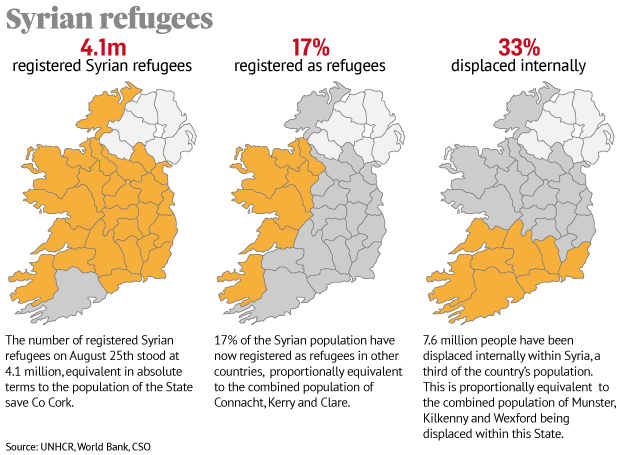 Some 300,000 Syrian asylum seekers have registered in the European Union, Norway and Switzerland since the Syrian conflict began. Some 30 per cent of those applications were made in the first seven months of 2015 alone.

UNHCR external relations associate Jody Clarke said despite the growing numbers making their way to Europe this cohort still represented less than 10 per cent of Syrians displaced internationally. He said the situation was getting worse as conditions deteriorated for Syrians displaced in the region.

More than 1.1 million Syrians had registered in Lebanon by the end of August where preliminary findings of a recent UN inter-agency study found 70 per cent of Syrian refugee households were living below the national poverty line.

In Jordan, which is host to almost 630,000 refugees, more than 85 per cent of Syrians are thought to be living below the national poverty line.

“It’s going to get worse before it gets better,” Mr Clarke said. “The conditions have deteriorated quite rapidly for Syrian refugees in Lebanon and Jordan. Up until now people thought they could wait this thing out and go back but a lot of people are now deciding they are going to look elsewhere”.

Despite this the UNHCR has said the regional refugee plan remains underfunded at just 33 per cent of the target figure.

On Friday UN High commissioner for Refugees António Guterres said the current situation was “primarily a refugee crisis, not only a migration phenomenon”.

“The vast majority of those arriving in Greece come from conflict zones like Syria, Iraq or Afghanistan and are simply running for their lives. All people on the move in these tragic circumstances deserve to see their human rights and dignity fully respected, independently of their legal status,” he said.

“Thousands of refugee parents are risking the lives of their children on unsafe smuggling boats primarily because they have no other choice.”

If you are viewing this on the app, visit irishtimes.com/data to search the figures.