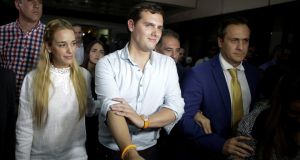 A visit by a Spanish politician to opposition leaders in Venezuela has drawn a hostile response from the Andean nation’s government, as well as highlighting deep pre-electoral divisions back in Madrid.

Albert Rivera, leader of the liberal Ciudadanos party and candidate for prime minister in Spain’s June 26th election, arrived in Caracas on Monday night for a two-day trip.

Mr Rivera was invited to Venezuela by members of the opposition to the leftist government of Nicolás Maduro, which faces social unrest as an economic crisis deepens.

“We cannot allow this any more, that an irresponsible person should come and conspire,” said Diosdado Cabello, speaker of the national assembly, ahead of the visit.

Last year Mr Maduro accused the political right in Spain, Colombia and the US of creating “a Madrid-Bogotá-Miami axis to conspire against our country”.

However, the Catalan politician arrived apparently without any problems, to be embraced in Caracas airport by Lilian Tintori, wife of imprisoned opposition leader Leopoldo López.

Spain has strong links with Venezuela. There are major business interests as well as some 400,000 passport holders living there. Former prime minister José Luis Rodríguez Zapatero recently visited in an effort to mediate between the government and opposition.

But the Venezuelan political crisis, which has seen the opposition call for a referendum to end Mr Maduro’s tenure, is now hogging the headlines in Spain’s own increasingly polarised election campaign.

On April 28th, the Spanish congress approved a motion backing an amnesty for political prisoners in Venezuela. The conservative Popular Party (PP) and the Socialist Party joined Ciudadanos in backing it, while the anti-austerity Podemos abstained.

Podemos has also fended off unproven allegations that it received financing from Venezuela, only adding to the sense that the South American nation’s problems have become a weakness for the Spanish party.

Podemos, meanwhile, has made an effort to distance itself from Caracas.

Pablo Echenique, a senior party figure, even accused the Venezuelan president of “doing the same thing as [Spanish acting prime minister] Mariano Rajoy, which is to talk about another country in order to avoid talking about his own”, a tactic he called “reprehensible”.

However, Podemos recently formed an electoral alliance with the communist-led United Left (IU), which voted against the prisoner amnesty motion and is outspokenly in favour of the Venezuelan government.

In a statement, IU claimed that López, the imprisoned opposition politician, “is not a political prisoner, nor is he being persecuted for his ideas, but for some clearly criminal acts”.