‘She’s so inauthentic’: the unmasking of Ivanka Trump

Maureen Dowd: Try as she might, nobody is buying the blond saviour routine any more

Ivanka Trump gives her first interview since being appointed as an advisor to the US president, her father Donald Trump. Video: CBS News 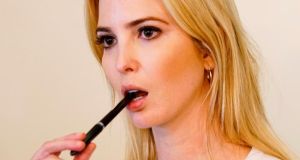 It was Ivanka’s nightmare.

Sipping vodka under chandeliers in a cool private club on the Lower East Side, the New York elite – the very ones Ivanka’s father scorned at a rally a few days ago for looking down on him even though he has “a much better apartment” and is “smarter” and “richer” – were shaking their well-coiffed heads over the fall of the first daughter.

Why had she stayed mute for so many days about the torment her father was inflicting on thousands of immigrant children? What will happen to her if Michael Cohen flips? Did she know she was as out as an outcast Edith Wharton character, doomed never to return to her privileged perch as a Manhattan society darling?

“It’s really easy for someone whose sole job in the White House is women and children to issue a statement – even Melania did it,” Emily Jane Fox said in an interview after her new book, Born Trump, was celebrated by her editors at Vanity Fair on Tuesday night at the Ludlow House.

“It just shows how fake Ivanka is,” Fox continued. “She’s crafted this whole image of herself that’s not actually her. And the real her is cooler, slightly more interesting, funnier. She curses like a sailor. She partied a lot when she was younger. She flashed a hot-dog vendor when she was in eighth grade. She chain-smoked. Which is so opposite of the image she put out there.

“What you’re seeing now is the unmasking. She can’t control the narrative any more because she’s so inauthentic. It has really come back to bite her.”

The twisted Trump family dynamic was on lurid display this past week, hitting a Marie Antoinette high point as the echoes of sobbing children snatched from parents fleeing violence collided with images of a whining, pampered child-president bragging about his crowd size and his bank account, all while he callously used helpless kids as hostages to get his wall.

Melania bizarrely wore a jacket on her trip to a child detention centre at the border that turned into the 2018 version of the George HW Bush “Message: I care” moment. Her $39 Zara jacket read, “I Really Don’t Care. Do U?” And yet again, it wasn’t clear whom she was trolling – most likely, as her husband tweeted, the press, which criticised her for wearing stilettos on the way to a goodwill mission to a hurricane-ravaged Texas. Which means the first lady is like her husband in one unfortunate respect: In times of national turmoil, she makes it about herself.

The 36-year-old Ivanka has fallen far from the days when she tried to stage her father’s inaugural to echo Camelot, perhaps with dynastic presidential dreams herself. “She was infatuated with the Kennedys,” Fox said.

She tried to present her brand as luminous, caring and classy – a champion of women and children with a carefully curated image over the years on Instagram, in a blog and in books. Amid the dark hailstorm of her father, Steve Bannon and Stephen Miller, she sold herself as the sunny morning – the one who would temper her father’s retrogressive and sometimes wretched moves.

Introducing him at the 2016 Republican convention, Ivanka assured the crowd that he had “empathy and generosity” as well as “kindness and compassion”.

Even then, before all the horrors that would follow, it seemed like fan fiction. As a former top Trump administration official recently told me, “Donald Trump is the meanest man I’ve ever met”.

Ivanka’s quest to have a brand that both complemented and contrasted with her father was quixotic. After her panic when he left her mother for Marla Maples – Ivanka worried she wouldn’t be able to keep the Trump name, and called him constantly – she spent her life fashioning herself, Vertigo-style, into his ideal.

But of course, no matter how hard Ivanka tried, Donald Trump thought she could be even more ideal. When she was a model, Fox writes, her father “suggested to friends that breast implants might help her along. One friend recalled getting a frantic call from Maryanne Trump, Donald’s sister, urging him to talk Donald out of letting her get plastic surgery that young. ‘It’ll ruin her,’ she said into the phone. When his friend confronted him about it, he denied that she was getting implants. At the end of the call, he asked, ‘Why not, though?’ ”

In some ways, Ivanka succeeded in being a Mini-Me. By 16 she trademarked her name with the intention of using it for everything from bras to brow liner to scrub masks. “There is a distinct genetic quality to Ivanka’s preternatural ability to self-promote,” Fox writes. And certainly she has cashed in on the Oval, minting money at the Trump International Hotel in Washington and other confluence-of-interest endeavours.

But Ivanka ran into split-screen trouble with her gauzy and glam mommy-of-the-year Instagram posts during the refugee ban, the migrant crisis and the Palestinians dying at the Israeli border during her visit to the opening of the US embassy in Jerusalem. (“Daddy’s Little Ghoul,” screamed the New York Daily News cover.)

Despite her stated desire to look out for children, Ivanka was never going to be able to control the ultimate wild child. An authentic jerk trumps an inauthentic brand ambassador.

Her father is the all-consuming maw, what Fox calls “an infinite pit of need – a time-sucking vampire who fed off those around him to sustain his own vanity”.

The president told House Republicans the other day that his daughter had asked him, “Daddy, what are we doing about this?” noting that she was concerned about the heartbreaking images. But nobody is buying her blond saviour routine any more.

Ivanka backed up the president’s fake narrative that it was Congress’s fault. When Daddy finally ended the pitiless policy that he imposed, she congratulated him on Twitter for white-knighting it and urged Congress to “find a lasting solution”.

The Trump family, of course, was seeing the problem as optics, not as a barbaric flouting of American values.

It makes sense. Donald and Ivanka are consumed with protecting their own brands. America’s? Not so much.