Canadian councillor (46) had been undergoing treatment for aggressive cancer 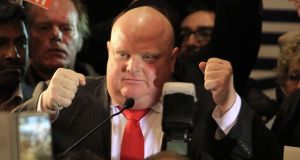 Rob Ford, the former mayor of Toronto who gained global notoriety for admitting to smoking crack cocaine while in office, died from cancer . Photograph: Reuters

Ford (46)who was serving as a Toronto city councillor, had been was undergoing treatment for an aggressive form of cancer that had reoccurred despite surgery and several rounds of chemotherapy.

Ford, married and a father of two small children, was diagnosed with a rare and hard-to-treat cancer in September 2014 after being hospitalised with abdominal pain.

He was in the middle of a campaign for re-election to mayor when the cancer was found but withdrew from the race and was elected as a city councillor instead.

Ford rode into office on a backlash against urban elites, casting an image sharply at odds with Canada’s reputation for sedate, unpretentious politics.

But his tenure as mayor was marred by revelations about his drinking problems and illegal drug use. He was repeatedly videotaped and photographed while intoxicated in public.

His statements and actions became nightly fodder for TV comedians and an embarrassment to many of the suburbanites he championed.