Irish missionaries praised for showing ‘a commitment that goes beyond logic’ 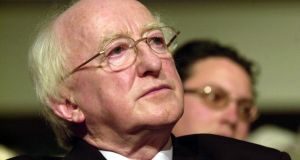 The selfless and often lifelong work of Irish missionaries “has been a powerful expression of the vision of the church of the poor”, says President Michael D Higgins. Photograph: Brenda Fitzsimons

Governments need to move beyond “rhetorical gestures” and “modest” goals to tackle climate change and poverty, President Michael D Higgins has said in advance of a series of crucial world summits this year.

The President said 2015 was “a year of decision making that will affect all our futures”, citing meetings in Addis Ababa in July and New York in September to agree UN sustainable development goals, along with a climate change summit in Paris in December.

Regarding the latter, he said, “it’s absolutely crucial that the text is one which represents real commitments”.

As for the planned new development goals, it would be unacceptable if heads of state opened negotiations “with a modest aim to eliminate extreme poverty”, he said. “It is possible to eliminate poverty – just that.”

Mr Higgins was addressing the annual conference of Misean Cara, the support group for Irish missionaries overseas, whom he praised for standing “side by side” with the world’s poorest people.

The President said he believed people worldwide were becoming more aware of poverty but at political level there was “a failure to rise to a systemic analysis”. Talks on development policy should not just concentrate on aid; rather they should examine trade links, financial systems and capital flows, he said, noting this was something he discussed with UN secretary general Ban Ki- moon on his visit this week to Ireland

To those struggling in poverty today, “how frustrating it must be when you hear rhetorical gestures on behalf of states”, he said.

The President paid tribute to the work of Irish missionaries who had shown “a kind of commitment that goes beyond logic”, and drew applause from the many priests and nuns present for welcoming this week’s beatification of Oscar Romero.

The selfless and often lifelong work of Irish missionaries “has been a powerful expression of the vision of the church of the poor”, the President said.

The number of Irish Catholic missionaries working in the developing world has halved in the past decade and now stands at about 1,500. The average age is about 70, and many are involved in handing over schools and hospitals to local congregations.

Last year, 356 missionary projects were approved for funding by Misean Cara, which is financed by Irish Aid, to the tune of €14 million. A further 30 emergency applications were approved, totalling €428,000, for Ebola-response measures in Sierra Leone, Liberia and Guinea.

Sr Geraldine Henry of the Daughters of Charity said the transition to local management of projects was a natural progression for her congregation. She cited the example of the Mekele eye clinic in northern Ethiopia where Sr Margaret Coyne, sister of Sabina Higgins – the President’s wife – worked for 23 years.

Sr Coyne was now in London but “her legacy is living on” through local doctors. Across Ethiopia, Sr Henry said, “we are now training our local sisters, building their capacity; they are smarter than us, to tell you the truth.

“The biggest challenges are things like the internet and electricity; the basic structures are not there.”

Highlighting the cost-effectiveness of their work, she added that missionary organisations “never have to go before the Public Accounts Committee because all our money goes 100 per cent where it’s needed”.

The conference heard how a number of missionaries had been honoured by their host countries, and in the past week the human rights group Afri, Action from Ireland, which has worked with Irish missionaries on a number of campaigns, received an award from the president of Timor-Leste for helping in its freedom struggle.

Joe Murray of Afri received the award in the Timorese capital Dili. Fellow campaigners Tom Hyland and Sean Steele shared in the honour in recognition of their role in the East Timor Ireland Solidarity Campaign.