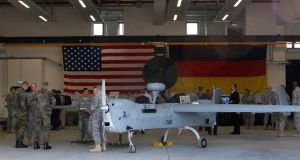 A Unmanned Aerial System at the US military base in Vilseck-Grafenwoehr in Germany. “The detachment of warfare feeds into how we are detaching ourselves more and more from the reality of living.” Photograph: Reuters/Michaela Rehle

The idea of clocking into work, sitting down at a desk and pressing buttons to kill people thousands of miles away is a terrifying, dystopian vision of a world so cruel we can’t even bear to look our enemies in the eye.

And it’s a real one. The United Nations is making a lot of noise about United States drones, which kill people in Pakistan and elsewhere. The prime minister of Pakistan, Nawaz Sharif, has called on the US to end the programme, even though CIA documents obtained by the Washington Post indicate Pakistani officials apparently know a lot about the drone programme and co-operate to some extent.

We baulk at the use of chemical weapons in Syria and the prison camps of North Korea but the detached killing from the air, we’re told, has become a necessary and successful way of picking off terrorists.

In 2008, I stood in Times Square in New York watching a wall of screens announce Barack Obama’s election win. It was an amazing moment, especially since four years previously I had attended John Kerry’s “victory rally” in Boston, which obviously went horribly wrong. There was, and still is, a huge appetite to see Obama as a peacemaker. He won the Nobel Peace Prize after all. The enthusiasm for Obama as a progressive liberal blurs when it comes to the operations of his military and the CIA. But, then again, love is blind.

Ireland complicit
Ireland has, of course, been utterly complicit in facilitating the killing of people in Afghanistan and Iraq and elsewhere during the US’s illegal wars. We high-five them as they enter Shannon on their way to the killing fields, or the less exciting outposts of modern warfare, the floating towns of their aircraft carriers and the operations centres on green-zone bases.

Last month, an aircraft landed at Shannon Airport “armed with a fixed weapon”. Successive Irish governments have permitted the landing of aircraft that were up to God knows what, but when you can see the weapons things get a little uncomfortable. Our Government decided this was very serious, and complained to the Americans, who said it was an administrative error and, you know, won’t happen again. We can hardly protest any further considering we’ve bent over backwards to dispose of our neutrality in favour of a pat on the head from our American buddies. For the Government, our diplomatic relationship with a superpower and the jobs their stopovers prop up are more important than anything else.

The future of war, one in which everyone suffers apart from the perpetrators, is, of course, biased in favour of those who have the technology and riches to impose clinical death from above. The doctrine that allows the US to kill al-Qaeda suspects anywhere in the world is a hangover of the borderless war on terror.

Amnesty International published a report this month with Human Rights Watch detailing drone strikes in Yemen, and concluded that officials in the CIA and military behind the drone campaign may have committed war crimes and should stand trial. Drone strikes have killed a Pakistani grandmother and injured her five grandchildren, the youngest of whom was three years old. In July last year, 18 innocent labourers gathered under a tree were killed by a drone strike in northern Pakistan. The youngest was 14.

Efficient and clinical
George Orwell wrote that political language “is designed to make lies sound truthful and murder respectable”. Drone strikes are meant to be efficient and clinical. They save American lives, we are told, because soldiers don’t have to make perilous journeys over land to seek out “militants” hiding in dangerous places. They don’t have to look them in the eyes when they’re shooting them dead, or risk a counterattack when positioning missiles in their direction. It’s a supposedly safer and more sanitised act of murder. But it doesn’t work. Since 2004 there have been 376 drone strikes in Pakistan. The death toll is between 2,525 and 3,613. Local reports compiled by the Bureau of Investigative Journalism estimate 926 of those were innocent civilians. So the US military got things wrong there between 26 and 36 per cent of the time. War is messy no matter how you sell its propaganda.

Drone operators are beginning to speak out. Brandon Bryant, who breached the PR surrounding the campaign by speaking to NBC, Der Spiegel and GQ, related details of his daily office work, killing people in Afghanistan from a screen in Nevada. After Bryant left his job in 2011 and began treatment for post-traumatic stress, he turned down his bonus of over $100,000. Upon his departure, he was given a rundown of the number of people who had been killed during remote missions in which he had participated: 1,626. It’s “more than just a video game”, he told GQ.

The detachment of warfare feeds into how we are detaching ourselves more and more from the realness of living. Detaching ourselves with technology is a growing trend worldwide, as we lose ourselves in screens. There are serious implications for how technology is eroding our empathy, but killing remotely from a computer is constructing a new wireless axis of evil.