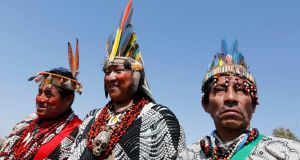 Leaders of the Shipibo people from the Peruvian Amazon in Lima, where the UN climate change conference is taking place, to highlight the rights of indigenous people. Since 2002, at least 57 environmental activists have been killed in Peru. Photograph: Mariana Bazo/Reuters

As ministers from four Latin American countries announced a high-profile initiative to restore and “re-forest” millions of hectares of degraded land in the region, another rainforest activist was found murdered in Ecuador.

José Isidro Tendetza Antún, a member of the Shuar indigenous people, had been planning to come to the UN climate conference in Lima; instead, his trussed-up body – which bore signs of tortute – was discovered by his son Jorge after a tip-off.

The murder victim had been prominent in a campaign against plans to drill oil in the Yasuni Amazon Reserve, and wanted to go to Lima to highlight the role played by Ecuador’s once “green” president, Rafael Correa, in approving the controversial plans.

As the Guardian noted, Tendetza had been campaigning against the Mirador project, run by Ecuacorrient, which isnow controlled by a Chinese conglomerate, CCRC-Tongguan. Activists claim it would devastate around 182,000 hectares of forest.

They believe his murder “is part of a pattern of escalating violence against indigenous leaders which responds to the Ecuadorean government and the companies’ need to clear the opposition to a mega-mining project in the Cordillera del Condor”.

The issue is so politically sensitive that a group of indigenous people from Ecuador travelling south to Lima had their bus “confiscated” by police while en route. Four widows of other indigenous Ashéninka activists from Peru did manage to make it.

Their husbands were killed in Peru’s Ucayali region in September over land they had spent a decade trying to secure for their community. Since 2002, at least 57 activists have been killed in Peru, making it a dangerous country for environmental activists.

Meanwhile, agriculture and environment ministers from Ecuador, Peru, Mexico and Costa Rica launched “Initiative 20x20”, describing it as a “historic new commitment” by their countries and others in the region to restore and re-forest 20 million hectares by 2020.

The announcement was made at the Global Landscapes Forum in Lima’s Westin Hotel and conference centre, attended by government ministers, civil society leaders and corporate chief executives, aimed to “resolve conflict and confusion” over forests and land.

More than 1,000 participants discussed how to cut climate pollution from land use – the source of 24 per cent of all greenhouse gas emissions, most of which come from clearing land for farming and leveling forests for wood, palm oil, pulp and paper.

A key focus was on competing claims by farmers, foresters, miners, conservationists and indigenous peoples. “In Peru, Brazil, Indonesia and beyond, these claims can lead not only to carbon emissions, but also to social conflict and violence,” the organisers conceded.

Meanwhile, there has been little or no progress at the UN climate conference in agreeing on safeguards for forest protection under the so-called REDD+ programme, which aims to reduce emissions from deforestation and land degradation worldwide.

“We are deeply disappointed at the lack of meaningful progress on REDD+ here in Peru, one of the countries with the most forests in the world, with many indigenous peoples,” said Ronny Hansen, policy adviser at of Norway’s Rainforest Foundation.

“Civil society, indigenous peoples, donors and private sector all agree there is a need for further guidance on safeguards,” Mr Hansen explained. “Safeguards are key to forest protection – to guarantee the rights of indigenous peoples and biodiversity.”