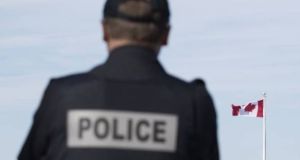 Police arrested a man in his mid-twenties after the attacks. Photograph: Getty

At least two people died and five were injured after being stabbed by a man wearing medieval clothes, armed with a bladed weapon near the Parliament Hill area of Quebec City, Canada, late on Saturday, local media reported.

The local police said they arrested a male suspect early on Sunday and told people residing near the area to stay indoors as the investigation was still ongoing.

The police had earlier said that they were on the hunt for a man dressed in medieval clothing carrying a bladed weapon, leaving “multiple victims”.

Five victims have been transported to a local hospital, but their immediate condition was not known, according to police spokesperson Etienne Doyon, cited by the CBC News.

It quoted Mr Doyon as saying that the suspect was in his mid-20s and was also taken to a hospital for evaluation.

There were no immediate details available on the possible motive behind the attack. - Reuters