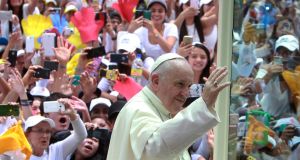 Pope Francis waves to the crowd from the popemobile as he arrives at Bolivar Square in Bogota, Colombia. Photograph: Luis Eduardo Noriega/EPA

Pope Francis on Thursday urged Colombians to shun vengeance following a bloody 50-year war with guerrillas but challenged the country’s leaders to enact just laws to resolve the causes of inequality that lead to violence.

At the start of his first full day in Colombia, Francis told government leaders in the courtyard of the presidential palace that all Colombians should see peace as a long-term commitment and not allow it to be weakened by partisan politics.

Colombians are deeply polarised as they prepare to receive 7,000 former fighters of the Farc guerrilla group into society and aim to repair divisions after a war that killed more than 220,000 people and displaced millions over five decades.

“Despite obstacles, differences and varying perspectives on the way to achieve peaceful coexistence, this task [of reconciliation] summons us to persevere in the struggle to promote a culture of encounter,” he told the dignitaries, headed by President Juan Manuel Santos.

Conservative Colombians are furious that under the 2016 peace deal, Farc leaders accused of kidnapping, displacements and murder will avoid jail sentences and instead may receive seats in congress as members of a civilian political party.

“It is not worth silencing the rifles, if we remain armed in our hearts,” Mr Santos said. “There’s no point in ending a war, if we still see one another as enemies. That’s why we need to reconcile.”

The pope said he hoped the determination to achieve lasting peace should “help us flee from the temptation to vengeance and the satisfaction of short-term partisan interests”.

He added: “The more demanding the path that leads to peace and understanding, the greater must be our efforts to acknowledge each another, to heal wounds, to build bridges, to strengthen relationships and support one another.”

But Francis, on his 20th foreign trip and his fifth to his native Latin America, said “just laws” were needed to “resolve the structural causes of poverty that lead to exclusion and violence”.

As part of the peace agreement, the government agreed with the Revolutionary Armed Forces of Colombia (Farc) to distribute more land and land titles to poor rural communities and to invest and bring development to war-torn areas.

The Farc, which began as a peasant revolt in 1964, has also pledged to help subsistence farmers switch from illegal crops like coca, the raw material that makes cocaine, to food crops.

“Let us not forget that inequality is the root of social ills,” Francis said at the presidential palace, after hugging and blessing children dressed in white.

The pope received a tumultuous welcome when he arrived on Wednesday, and crowds gathered early on Thursday morning in front of the Vatican embassy to see him leave for the presidential palace.

“The pope’s visit will allow Colombians to move toward a true reconciliation. It will fill our hearts with the presence of God, with joy and blessing for our land for which we have suffered so much,” said Olga Guerrero, a student in front of the embassy.

In his speech to the leaders, the pope quoted from the 1982 Nobel Prize acceptance speech of Colombian writer Gabriel Garcia Marquez about life and love being the proper response to oppression and added in his own words:

“There has been too much hatred and vengeance. The solitude of always being at loggerheads has been familiar for decades, and its smell has lingered for a hundred years; we do not want any type of violence whatsoever to restrict or destroy one more life,” he said.

Afterwards, he prayed in the colonial cathedral before a painting of Our Lady of Chiquinquira, the patron saint of overwhelmingly Catholic Colombia, and addressed a raucous crowd of young people outside in Plaza Bolivar.

At this point in Colombia’s history, the young had a duty to teach older generations “to look to the future without the burden of hate,” Francis said.

After addressing bishops, Francis was due to say a Mass before an expected crowd of more than a million people in Simon Bolivar Park.

He will visit the cities of Villavicencio, Medellin and Cartagena before leaving for Rome on Sunday night.