Authorities in Chandigarh attempt to highlight ‘ill-effects of alcohol consumption’ 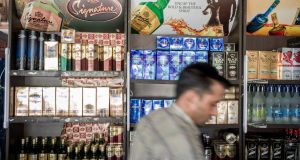 Bottles of whiskey and vodka on the shelves of a liquor store in Chandigarh, Punjab, India. Photograph: Sanjit Das/Bloomberg via Getty Images

Authorities in the northern Indian city of Chandigarh have ordered the installation of breathalysers in more than 150 bars by September 15th, to raise awareness among patrons about the “ill effects of alcohol consumption”.

The order, by the city’s excise commissioner, instructed bar owners to “educate consumers regarding the availability of a breathalyser via a display board”.

It also urged them to spread awareness about the hazards of drinking beyond permissible limits, and of driving afterwards.

Bar owners have also been asked to submit a “compliance report” to the excise authorities on the order, and failure to comply is likely to invite disciplinary action that could also entail closure, officials said.

Terming the breathalysers a “self-check” mechanism, the official directive, which has come under sustained criticism from bar and owners and customers, on Thursday clarified that the devices carried no “legal sanctity”.

City bar owners, however, are incensed at the edict to install breathalysers, with Arvinder Pal Singh, who heads Chandigarh’s Hotel and Restaurant Association, demanding to know how the excise department can limit the amount their patrons drink.

“Other than for car drivers, there is no limit to drinking prescribed under the law,” Mr Singh said.

Abhay Jagat, who runs several high-end bars and restaurants in the city, claimed that the order on breathalysers was “ridiculous”.

“The administration will be demanding that we install weighing machines next and conduct blood tests on our clients,” he said.

Other bars owners were infuriated at the high cost of breathalysers, which are priced at about €260 each.

In March, India’s supreme court shut down all bars and liquor shops within 500m of a state or national highway across the country, in a move aimed at reducing drink-driving.

This had resulted in tens of thousands of bars and restaurants closing down, costing an estimated 1.5 million jobs.

A majority of Chandigarh’s bars reopened earlier this week after the supreme court revised that directive.

The closures had especially affected Chandigarh, 250km north of New Delhi, whose 1 million residents consume more than 30,000 bottles of spirits, much of it whiskey, on a daily basis.