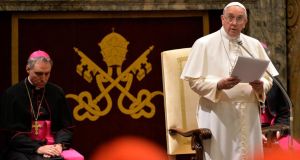 It is clear that Pope Francis’s pre-Christmas address to the Roman curia this week did not sit well with many of its members. It was a coruscating and very public critique.

In one photograph, Archbishop Georg Gänswein, head of the papal household, secretary to Pope Francis and to Pope Emeritus Benedict, looked less than pleased. Last March the archbishop told German television he was shocked at the election of Pope Francis.

He “favoured other candidates – I was wrong – but then so were other people”. He said the pope was the darling of the media “but that won’t always be the case”. The pope is not “everybody’s darling”, he said.

We can be sure that is also the case where the archbishop and members of the curia are concerned. This is more or less the same curia blamed by the College of Cardinals in great part for Pope Benedict’s unexpected resignation last year.

There was “the sickness of feeling oneself immortal, immune or in fact indispensable”, he said. Graveyards were full of such people, he added, saying a curia “which does not seek to improve itself is a sick body”.

There was the “Martha-ism’ [derived from Lazarus’s sister] of excessive busyness of those who immerse themselves in work” and the “mental and spiritual petrification” of those “who have a heart of stone and a stiff neck”.

There was also the sickness of “excessive planning and functionalism”.

Fifth was “bad co-ordination” when members lose communion among themselves” and that “of spiritual Alzheimer’s” . . . “a progressive decline of the spiritual faculty”.

Next was “rivalry and vainglory” when “appearance, the colour of garments and signs of honour become the primary objective of life”. There was the “existential schizophrenia” of those “who live a double life, fruit of hypocrisy typical of the mediocre”, “of gossip, of grumbling and of tittle-tattle”, and of the “divinising directors . . . who court their superiors”.

The speech is at www.news.va/en/news/pope-francis-christmas-greetings-to-curia

1 Covid-19: Public urged to ‘stay at home’ as 1,025 further cases confirmed in State
2 Transmission of Covid-19 on flight into Ireland linked to 59 infections
3 Man (21) charged with breaking into a house armed with an axe
4 Two hundred Irish retailers for all your online Christmas shopping
5 President signs Bill on mother and baby home records into law
Real news has value SUBSCRIBE