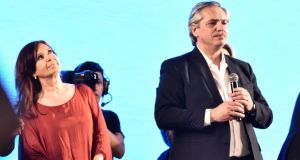 Argentina is facing into a new cycle of economic turmoil after the populist Peronist movement swept back into power in elections on Sunday.

Former minister Alberto Fernández took 48 per cent of the poll, enough to guarantee him outright victory on the first round against incumbent president Mauricio Macri who lagged behind on 40 per cent.

“The government has returned into the hands of the people,” Mr Fernández told supporters at a euphoric victory rally in Buenos Aires.

But markets are suspicious of Peronism, especially because Mr Fernández’s running mate is former president Cristina Kirchner. Her eight years in office were marked by conflict with foreign bondholders and increasingly heterodox policies than resulted in spiralling inflation, devaluations of the peso and a run on reserves.

In conceding defeat Mr Macri promised to oversee an “orderly transition” between now and December 10th when Mr Fernández is sworn in. Argentina’s central bank immediately responded to Sunday’s result by tightening currency controls in an effort to contain a run on the peso as the threat of default once again haunts the country’s economy.

Argentina’s first ever democratically elected right-wing president Mr Macri had promised to “normalise” an economy battered by decades of populism when elected back in 2015. But he was punished by voters after his reforms ended in failure, resulting in rising poverty and unemployment.

Most gallingly for his economic team and its cheerleaders in the market, his term in office has seen the value of the peso fall even further and he will hand over a higher inflation rate than the one he inherited from Ms Kirchner in 2015.

The immediate challenge for Mr Fernández will be how to handle a debt burden than many analysts worry is unsustainable. The Macri administration borrowed heavily as it sought to minimise the social impact of his efforts to wean the country off spendthrift populist spending. But his strategy was left exposed by the economy’s failure to ignite and then hit the buffers after rate hikes by the US Federal Reserve soured investors on emerging markets.

Argentina faces huge debt repayments next year and without the cash to meet them Mr Fernández will either have to renegotiate with bondholders and the International Monetary Fund or oversee the ninth sovereign debt default in the country’s history.

On a visit to the Middle East he slammed Mr Fernández for a hand gesture he made after voting in support of freeing former Brazilian president Luiz Inácio Lula da Silva from prison, where he is serving a sentence for corruption. Mr Bolsonaro called the gesture “an affront to Brazilian democracy and the Brazilian judicial system”.

The Brazilian president has already floated the idea of suspending Argentina from the organisation if its government interferes with his team’s drive for trade liberalisation.

His administration has also reportedly studied the impact of Brazil quitting the body, including what such a move would mean for the recently concluded trade deal with the European Union. Such a drastic measure would imply the abandonment of the country’s most important strategic alliance around which it has orientated its diplomatic efforts since the return of democracy in the 1980s.

In neighbouring Mercosur member Uruguay the ruling left-wing Broad Front alliance will face a stiff challenge in its bid to hold on to the presidency from the right-wing National Party in a run-off round next month after Sunday’s first round of voting produced no outright winner.