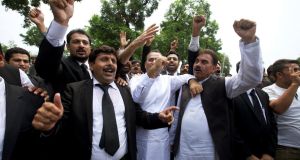 Lawyers chant slogans against prime minister Nawaz Sharif on Monday outside a supreme court hearing that could put the Pakistani prime minister on trial on corruption charges or disqualify him from office. Photograph: Faisal Mahmood/Reuters 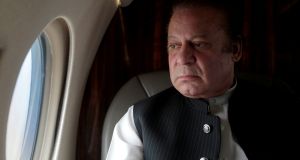 Pakistani prime minister Nawaz Sharif looks out the window of his aircraft after attending a ceremony to inaugurate the M9 motorway between Karachi and Hyderabad on February 3rd, 2017. Photograph: Caren Firouz/Reuters

Pakistan’s supreme court on Monday began hearings that will decide the fate of prime minister Nawaz Sharif, who is fighting for his job as he contests the damning conclusions of a corruption investigation into his family’s wealth.

The court could put Sharif on trial on corruption charges or disqualify him from office. Mr Sharif has denied any wrongdoing, but few expect the judges to dismiss the case after an investigation team submitted a 254-page report into his family wealth last week.

The investigators alleged his family’s wealth was beyond its means, and accused his children, including his daughter and presumed heir Maryam, of signing forged documents to obscure ownership of posh London flats.

“The JIT has gone beyond the mandate it was assigned,” she said, referring to the Joint Investigation Team, made up of finance and law enforcement officials including military intelligence officers.

“The language the JIT has used shows its malafide.”

Mr Sharif’s troubles have shone a spotlight on two issues that have bedevilled Pakistan since its creation in 1947 – corruption and the struggle for power between civilian politicians and the powerful military.

Mr Sharif (67), the son of an industrialist serving his third term as prime minister, has had a fractious relationship with the army.

He has talked of a conspiracy against him, but has not named anyone. His allies, however, privately claim that elements of the military and the judiciary are bent on toppling him.

The army spokesman brushed aside any suggestions the military’s hidden hand was the driving force behind the corruption investigation. “The Pakistan army is not directly connected,” he said.

Mr Sharif has rejected demands from opposition parties to resign, warning his ousting would destabilise the country and imperil hard-won economic gains since his poll victory in 2013.

“It hurts that despite of our hard work, attempts are afoot once again to push the country back,” Mr Sharif told a meeting of his ruling PML-N parliamentary party over the weekend.

In April, Mr Sharif narrowly escaped disqualification after the supreme court ruled there was insufficient evidence to remove him – by a 2-3 split – over documents released by the Panama Papers leak into off-shore wealth.

But it ordered further investigations, and the formation of the Joint Investigation Team.

Mr Sharif was originally nurtured by the military as a civilian politician who would protect their interests, and he served as prime minister twice in the 1990s.

But relations soured and his second stint as prime minister ended when he was ousted in a 1999 military coup leading to a decade of exile. Relations with the military during the current term have also been uneasy.

Mr Sharif’s legal team and the opposition will be given a chance to contest the JIT findings and Sharif is expected to be summoned to appear before the court in coming days or weeks.

Opposition politicians say Mr Sharif is concocting claims of conspiracy to save his skin and argue that if he really wanted to protect democracy he would step down.

Imran Khan, the opposition leader who pushed the hardest for Sharif to be investigated, said the premier would end up in jail, and vowed protests if he was not ousted by the court.

“Either we will celebrate in Islamabad or otherwise we will hit the streets to save our democracy and to make sure we send this mafia to ... jail,” Mr Khan told supporters.