Vista of devastation: apartment buildings, a hospital and factories flattened 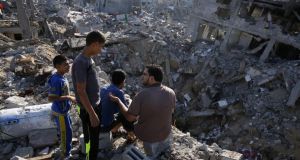 Adala Abu Medein named the centre she founded for autistic and Down syndrome children Right to Live. The Abu Medeins are an influential old Gaza family, so it wasn’t difficult for her to enlist the help of the US and Canadian governments, the EU and a Saudi prince to finance the worthy project. The four-building compound was designed in Mediterranean style, in beige stone with red tile roofs.

On July 16th, Abu Medein received a phone call from the Israeli army. They believed there was a Hamas rocket launcher on the roof of Right to Live and they intended to destroy it.

“That’s impossible,” Abu Medein argued. “We have solar panels on the roof. We have a special security system of cameras, lights and guards round the clock. The building is locked and no one has entered it.”

Despite Abu Medein’s pleas, the IDF attacked the Right to Live centre. A plaque still hangs beside the front door, commemorating the centre’s completion in 2011, under the auspices of USAID and American Near East Refugee Aid. The US contributed $200,000 (€152,000) annually. “To get the money, we signed a pledge saying we were opposed to terrorism,” recalls Ahmad Helou, the centre’s executive manager.

On the ground beneath the plaque lie the debris of a flare, a detonator and missile shards. If they were not manufactured in the US, they were paid for by $3 billion in annual military aid to Israel.

A total of 1,200 autistic and Down syndrome children were cared for at Right to Live. Today, chunks of plaster lie on the flowered sheets of the beds in the paediatric clinic. The walls are covered with shrapnel holes. Boxes of medicine – a recent gift from Oxfam – spill out of the cupboard. Dust-coated plush toys are scattered in the rubble of the playroom.

On the roof, I found fuel tanks, air conditioners, the engine for the building lift and solar panels, all pierced by Israeli weapons. No sign of a Hamas rocket launcher. “They destroyed all the infrastructure in Gaza,” says Helou. “I think it’s a strategy to keep us underdeveloped.”

A balloon armed with a surveillance camera and two watchtowers mark the Israeli border, 3km away, beyond the buffer zone from which Israel excludes Palestinians, depriving them of land.* To the left and right lies a vista of devastation: the flattened El Wafa hospital, dozens of gutted apartment buildings and destroyed factories.

A small crowd has formed in the ruins of Nezaz Street, where a factory owner is distributing cooked meat and rice. Naima (49) hugs a plate wrapped in tin foil. I offer her a lift to the badly damaged building where she lives. “This is the first time in my life I’ve accepted charity,” she says, weeping in the back seat of the car.

In Naima’s apartment, broken glass and rubble have been swept aside to leave room for the family to sleep. A photograph of her nephew Amar, who was killed fighting an earlier Israeli incursion, hangs on the wall. “I am very proud of my cousin,” says another nephew, Sa’ed (17). “God willing I will be a martyr like him.”

The workers at the Interlock & Curbstone factory are all from Shejaia and neighbouring Beit Hanoun. “We lost our homes and our jobs,” says Smail (30). Isn’t there some truth to the fact that Hamas threatens Israel with rockets and tunnels? I ask. “Not even one half of one per cent,” says Mohamed (24). His wife is expecting their first child in five days. They will have only one, “because of the war,” he says.

“I wrote ‘Hamas’ on my wife’s tummy because I support the resistance.”

The adjacent Sarayo sweets and ice cream factory was badly damaged, but is still standing. It was in operation for only three months. “They were so happy when it opened,” recalls Hatem Hassouma, the owner of the paving stone factory.

At the beginning of the land invasion, Israeli soldiers used Hassouma’s industrial complex as a base. “I thought, ‘Thank God. They won’t destroy it. They know there’s nothing military in it,” says Hassouma.

“But the moment they left, they bombed it with F-16s. They want to kill the Gazan economy.” In the 50-day war, 240 factories were destroyed, he says.

Hassouma’s concrete factory was also destroyed. Since Hamas started lining the walls of its tunnels with cement, it has become a controlled substance. “We are not producing any materials used against Israel,” Hassouma insists.

“We produce only for UN agencies, and we have four UN monitors making sure nothing goes to Hamas ... If they destroyed our factories because we produced concrete, what about our neighbours? They made ice cream. Did they think it was fuelling missiles?”