US withdrawal from Syria may edge Erdogan closer to Putin 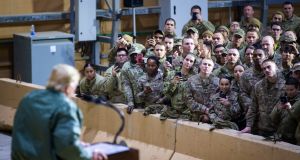 Uncertainty created by US policy shifts in the Middle East is forcing regional and international actors to rethink relationships and forge new approaches to challenges they face.

US president Donald Trump’s decision to withdraw 2,200 US troops from northern Syria has accelerated this process.

The Turkish team’s arrival coincides with the deployment of the Russian-backed Syrian army and allied militias in the northern sector of the Syrian-Turkish border around the flashpoint city of Manbij, which is held by US and Kurdish forces. The Syrian flag now flies over the town.

Russia seeks to prevent Erdogan from ordering the invasion of Manbij as the first phase of a major campaign to oust the Syrian Kurdish People’s Protection Units (YPG) from the Syrian-Turkish border zone. Such an operation could prolong the nearly eight-year Syrian war and could involve clashes between Turkish forces and Iranian-supported militiamen allied to Damascus.

Russia argues the YPG, founded by Turkey’s insurgent Kurds, should pull out of the border zone and hand it over to Syrian troops, reportedly reinforced by Russian police, who would provide security for Turkey and fight against the Islamic State terror group, also known as Isis.

The planned US troop pull-out has given Erdogan considerable leverage with both Moscow and Washington. Putin seeks to ensure the return to Damascus’s rule of the 25 per cent of Syria now controlled by Washington’s Kurdish allies.

Erdogan wants the US to end its alliance with Saudi Arabia – following the diminution of its regional influence over the past year – and recognise Turkey as its main regional partner. However, unsettled by Trump’s erratic, unpredictable behaviour, Erdogan also appears determined to boost relations with Putin, who appears to be a more reliable ally than the US leader.

As these developments unfold, both Russia and pro-western Lebanon have called for a UN Security Council meeting to discuss Israel’s air raid, mounted within Lebanese territory earlier this week, against a weapons depot near Damascus. The two claim Israeli fighter planes endangered two civilian airliners en route to airports in Beirut and Damascus.

The Russian defence ministry cited the incident last September when a Russian reconnaissance plane was shot down and 15 crew members killed by Syrian ground fire while Israelis mounted a strike against “alleged Iranian targets” in Syria. Since then Russia upset Israel by providing Syria with the advanced S-300 air defence system, which is not yet operational.

Israel’s raid has strained relations with Russia, which deteriorated in September when Israeli prime minister Binyamin Netanyahu rejected a Russian proposal to ensure pro-Iranian fighters left Syria after US troops pulled out. Israel regards Iran’s military presence in Syria as a major threat and fears it could increase with the US withdrawal. Netanyahu is vexed with President Trump, who was regarded as a close friend and partner.

Trump’s surprise visit to a US airbase in western Iraq has exacerbated fears in Iraq and Syria over the commitment of 5,200 US forces based in Iraq to the fight against Islamic State, also known as Isis, which still has 25,000-30,000 fighters in these two countries.

Trump angered Iraqis when he insisted Iraqi prime minister Adel Abdul Mahdi should meet him at the US base. Iraqis would see this as an affront to their country’s sovereignty. Trump has not so far spoken of pulling US forces from Iraq, but last summer he asked Baghdad to pay in oil for protection.

Separately, the United Arab Emirates this week reopened its embassy in Damascus, and Saudi protectorate Bahrain plans to follow suit, making it likely that Syria, expelled from the Arab League in 2011, could return in time for the Arab summit in March, ending Syria’s isolation.