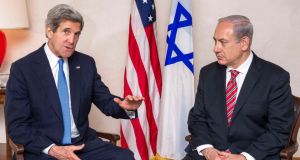 US s ecretary of state John Kerry said today he had agreed to work with Israeli and Palestinian leaders to boost economic growth in the occupied West Bank as he seeks ways to revive Middle East peace talks.

Speaking after a three-day visit to the region, during which he met Israeli prime minister Benjamin Netanyahu and Palestinian president Mahmoud Abbas, Mr Kerry told reporters he would provide full details of the economic plans next week.

"We agreed among us ... that we are going to engage in new efforts, very specific efforts, to promote economic development ... and to remove some of the bottlenecks and barriers that exist with respect to commerce in the West Bank," he said.

"We intend to try to create the conditions for peace so that we can resume negotiations between the parties in a clear and precise, predetermined manner," he said at Tel Aviv airport.

Mr Kerry, who flew on to London for a meeting of G8 foreign ministers, was on his third visit to the region in less than three weeks, a mediation effort spurred by US president Barack Obama's trip to Israel and the West Bank last month.

But neither man has put forward any new initiative to encourage a return to negotiations that collapsed in 2010 in a dispute over Israeli settlement-building in the West Bank, which Palestinians fear will deny them a viable state.

"Economic growth will help us to be able to provide a climate, if you will, an atmosphere with in which people have greater confidence about moving forward," Mr Kerry said.

"But I want to emphasise, and I emphasis this very strongly, this is not in lieu of or an alternative to the political track. It is not a substitute. The political track remains the primary focus."

A World Bank report published last month said Israel's West Bank checkpoints and restrictions inflicted long-term damage on Palestinians' ability to compete in the global market. Israel cites security concerns for those restrictions in the territory, which it captured along with East Jerusalem and the Gaza Strip in the 1967 Middle East war. Palestinians seek to establish a state in those areas.

"With respect to the economic plans ... I will be very specific next week," Mr Kerry said. "We will have a Washington meeting and you all will have a chance to see this fleshed out in full."

With Mr Kerry at his side before talks earlier in the day in Jerusalem, Mr Netanyahu told reporters that Israel wanted to "make a serious effort" to end the conflict with the Palestinians. "This has economic components, and we welcome any initiatives that you and others will bring forward in this regard," he said. "But it also has a political component, political discussions that will address a myriad of issues. Foremost in our minds are questions of recognition and security.”

Mr Netanyahu was referring to his demand that Palestinians recognise Israel as the Jewish state, a step they fear could compromise any right of return of Palestinian refugees, as well as harming the status of Israel's 20 per cent Arab minority.

Nabil Abu Rdeineh, a spokesman for Mr Abbas, said any efforts to bring about economic improvement must occur in tandem with political moves. "Palestinian economic development is important - we have plans on how to achieve it - but this isn't an alternative to the political track," he said.