UN may struggle over action on Syria

Hundreds reported dead after chemical attacks on civilians near Demascus 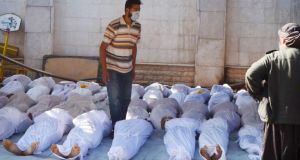 Syrian activists inspect the bodies of people they say were killed by nerve gas in the Ghouta region, in the Duma neighbourhood of Damascusyesterday. Photograph: Reuters/Bassam Khabieh

International alarm over reports of chemical weapons attacks in Syria has triggered an emergency session of the United Nations security council, but even with the scale of the casualties reported from the scene there is no guarantee that agreement on action can be reached.

The US followed Britain and France in concluding in June that the Syrian government had “probably” used chemical weapons three times earlier in the year, most likely small amounts of the nerve agent sarin. That led to a decision publicly to approve sending weapons to the rebels fighting President Bashar al-Assad for the first time.

But Russia, a close ally of Assad, is likely to remain sceptical, especially in the light of repeated denials from Damascus since the news broke yesterday. Moscow immediately sounded a warning note about a possible “provocation”. And if Russia has reservations, on past form China will probably follow suit at the UN.

“The United States is deeply concerned by reports that hundreds of Syrian civilians have been killed in an attack by Syrian government forces, including by the use of chemical weapons, near Damascus earlier today,” White House spokesman Josh Earnest said.

Against a background of long-standing divisions over Syria, the “big five” permanent, veto-wielding members of the council may struggle to respond to what was being described as the worst case of the use of chemical weapons since the Iraqi attack on Halabja during the Iran-Iraq war in 1988.

President Barack Obama has spoken for a year of the use of banned chemical weapons being a “red line” that could not be crossed without serious consequences. He has also been criticised at home and abroad for failing to make good on that warning.

The initial response from the US, Britain and France was the most obvious one: to call for the 20-strong team of UN arms inspectors who are already in Syria to investigate this latest allegation. The White House said that was “consistent with its purpose and mandate”.

That careful language seemed intended to anticipate objections from Damascus. The Syrian government has a track record over the past two years of playing for time to exploit international and regional divisions, while insisting on the full application of its sovereignty in the face of any demands for outside involvement.

A UN spokesman said that the leader of the 20-man UN team, the Swedish expert Ake Sellstrom, was “in discussions with the Syrian government on all issues pertaining to the alleged use of chemical weapons, including this most recent reported incident”.

The EU and the Arab League both also demanded that the UN inspectors be deployed to the area.

But the Russian foreign ministry noted that the reports had emerged just as the current UN inspectors had arrived in Syria. It said: “This makes us think that we are once again dealing with a premeditated provocation.”

What are the toxic agents?
Sarin – Colourless, odourless liquid that kills mostly through inhalation. Like other nerve agents, sarin works by blocking the “off switches” of the nervous system.
Tabun – Easiest to make, as the chemicals needed can be found on open market. It will stay on surfaces for longer than sarin.
Soman – Fastest-killing nerve agent, it works in the same way as other organophosphate nerve agents. It has a slight fruity or camphor odour.
VX – Believed to be in the Syrian stockpile. It is an oily amber liquid and, like sarin, has no smell or taste. It causes the same symptoms.
Phosgene – Responsible for more deaths than any other chemical in the first World War. Can cause fluid on the lungs, shortness of breath and heart failure.
Insecticides – Milder forms of organophosphates are used as insecticides. These can still kill in large quantities.
– (Guardian news service)