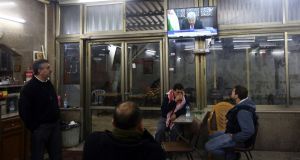 Palestinians in the West Bank city of Nablus watch as Palestinian president Mahmoud Abbas gives his reaction, in a televised speech, to Donald Trump’s recognition of Jerusalem as Israel’s capital. Photograph: Alaa Badarneh/EPA

A cacophony of angry and despairing voices across the Middle East and the world has warned that Donald Trump’s recognition of Jerusalem as the capital of Israel will destroy the peace process, strengthen extremists and weaken America’s standing in the world.

In an address to reporters moments after Mr Trump had finished speaking, the United Nations secretary general, Antonio Guterres, voiced his opposition to “any unilateral measures that would jeopardise the prospect of peace for Israelis and Palestinians”.

“In this moment of great anxiety, I want to make it clear: There is no alternative to the two-state solution. There is no Plan B,” Mr Guterres said.

Palestinian president Mahmoud Abbas said Mr Trump had destroyed his credibility as a Middle East peace broker. In a televised statement, he said the US president’s decision was “ declaration of withdrawal from the role it has played in the peace process”. He said the Palestinian leadership would meet in the coming days and consult with Arab leaders to formulate a response.

Israeli prime minister Binyamin Netanyahu, in contrast, hailed Mr Trump’s announcement as a “historic landmark” and urged other countries also to move their embassies in Israel to Jerusalem.

In a video posted to YouTube, he said his country was “profoundly grateful” for Mr Trump’s “courageous” and “just” action.

Elsewhere in the Middle East and beyond, however, the response was universally hostile, including from the US’s steadfast ally Saudi Arabia, which believes the US move damages Riyadh’s continuing efforts to negotiate a peace deal, starting with a unification of the Palestinian leadership.

‘Fire with no end’

A spokesman for the Turkish president, Recep Tayyip Erdogan, said the US was “plunging the region and the world into a fire with no end in sight”. He added that the Organisation for Islamic Co-operation would meet in Istanbul on December 13th in a special session to co-ordinate a response.

The Turkish foreign minister, Mevlüt Çavusoglu, disclosed he had told the US secretary of state, Rex Tillerson, that Washington was making a grave mistake, and the whole world was against the decision. Turkey has suggested it might cut diplomatic ties with Israel if the embassy move goes ahead.

The French president Emmanuel Macron was the first western leader to reject the announcement, saying the final status of Jerusalem had to be settled by negotiation. He called for calm and for restraint from violence.

British Prime Minister Theresa May criticised the move in a written statement issued by her government, calling the step “unhelpful in terms of prospects for peace in the region.”

Both Germany and France updated travel advice to their citizens, warning of possible clashes in Israel and the occupied territories.

At the request of Jordan and the Palestinians, an emergency meeting of Arab foreign ministers will be held on Saturday. The Arab League warned any recognition of Jerusalem would be a blatant attack on the Arab nation.

Iran’s supreme leader, Ayatollah Ali Khamenei, said any move to recognise Jerusalem as Israel’s capital was made “out of despair and debility” because “their hands are tied and they can’t achieve their goals”.

Before Mr Trump made his announcement, Pope Francis issued an unusually heartfelt plea to the president to respect the status quo on Jerusalem, and to conform with UN resolutions, telling thousands of people at his general audience: “I cannot keep quiet about my deep worry about the situation that has been created in the last few days.”

The pope said he hoped “wisdom and prudence prevail, in order to avoid adding new elements of tension to a global panorama that is already convulsed and marked by so many cruel conflicts”. – Guardian/Agencies