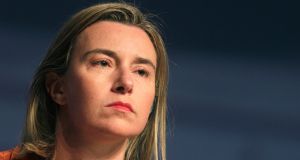 EU foreign policy chief Federica Mogherini expressed “serious concern” about US president Donald Trump’s decision to recognise Jerusalem as Israel’s capital, saying it could have “repercussions” for the prospect of peace in the Middle East.

Ms Mogherini said the EU and its member states would continue to respect the international consensus on the location of their diplomatic representations in Israel until the final status of Jerusalem was resolved.

No country at present has its embassy in Jerusalem.

“The EU calls on all actors on the ground and in the wider region to show calm and restraint in order to prevent any escalation. The focus should remain on creating conditions for direct and meaningful negotiations that can resolve all final status issues,” Ms Mogherini said.

“A negotiated two-state solution, which fulfils the aspirations of both sides, is the only realistic way of bringing the lasting peace and security that both Israelis and Palestinians deserve.”

The Trump move highlights once again the significant differences between the US and its most important ally, the EU, on key foreign policy, particularly Middle East, issues.

The union has repeatedly warned Mr Trump against tearing up the nuclear deal with Iran, which the EU played an important part in brokering. Trump officially “decertified” the nuclear deal in October, calling it “one of the worst and most one-sided transactions the United States has ever entered into”.

EU diplomats have also responded with concern to Mr Trump’s unwillingness to explicitly endorse a two-state solution in Israel-Palestine, which has for two decades been a cornerstone of international mediation efforts. A crucial part of that international consensus has also been the refusal to recognise Israel’s claim to Jerusalem as its capital.

European leaders have also expressed concern that Mr Trump’s “America First” agenda undermines transatlantic relations. Speaking on Tuesday at a press conference in Brussels with US secretary of state Rex Tillerson, Ms Mogherini had warned that “any action that would undermine” peace efforts to create two separate states for the Israelis and the Palestinians “must absolutely be avoided”.

“A way must be found through negotiations to resolve the status of Jerusalem as the future capital of both states,” Ms Mogherini said, stressing the EU’s support for unlocking meaningful peace talks.

The EU’s 28 foreign ministers will discuss the issue with Israeli prime minister Binyamin Netanyahu when he attends a breakfast before their meeting in Brussels next Monday.

In Jerusalem the EU ambassador to Israel, Emanuele Giaufret, told Channel 7 TV the EU would not follow Mr Trump’s lead, and its embassy would remain in Tel Aviv. “There is a UN resolution on this issue and the issue of Jerusalem must be raised in the negotiations between Israel and the Palestinians,” he said.

He reiterated the EU’s position on the two-state solution, which is considered “the only solution to settle the conflict”. “We believe that most Israelis agree with this solution,” he said.