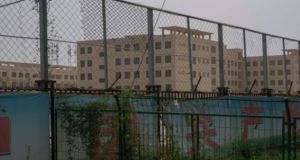 China has warned it will deliver a “resolute response” to any move by Britain to sanction officials involved in the alleged human rights abuses against the country’s mainly-Muslim Uighur people.

Mr Raab said he would also be updating MPs on Monday on the government’s response to the imposition by the Chinese government of a draconian new national security law on Hong Kong. The foreign secretary said he had had discussions with home secretary Priti Patel amid reports ministers are preparing to suspend the extradition treaty with the former British colony — a move that would further infuriate Beijing. The Chinese were already furious at the Government’s decision last week to ban tech giant Huawei from the UK’s 5G network — reversing a previous decision to allow it a limited role.

The Chinese ambassador to the UK Liu Xiaoming said it would be “totally wrong” for Britain now to impose sanctions on Chinese officials and said Beijing was ready to respond in kind. “If the UK goes that far to impose sanctions on any individuals in China, China will certainly make a resolute response to it,” he told BBC One’s The Andrew Marr Show.

“You have seen what happened between China (and) the United States. They sanctioned Chinese officials, we sanctioned their senators, their officials. I do not want to see this tit-for-tat between China-US happen in China-UK relations. “I think the UK should have its own independent foreign policy rather than dance to the tune of the Americans like what happened to Huawei.” Mr Raab insisted that Britain wanted good relations with China but said it could not stand by while abuses such as forced sterilisations and mass re-education camps took place. “It is clear that there are gross, egregious human rights abuses going on. We are working with our international partners on this. It is deeply, deeply troubling,” he told The Andrew Marr Show.

“The reports of the human aspect of it — from forced sterilisation to the education camps — are reminiscent of something we have not seen for a long, long time.

“This from a leading member of the international community that wants to be taken seriously and in fact who we want a positive relationship with. But we cannot see behaviour like that and not call it out.”

UK shadow foreign secretary Lisa Nandy called on the government to use Britain’s new independent sanctions regime to target individuals implicated in human rights abuses in Xinjiang. “They could do that tomorrow,” she told The Andrew Marr Show.

He suggested video footage, said to be from Xinjiang, showing men, kneeling and blindfolded waiting to be led onto trains was “fake”. “There is no so-called massive forced sterilisation among Uighur people in China.

“It is totally against the truth. “I cannot rule out single cases for any country. “There is no such concentration camp in Xinjiang,” he said. He rejected claims China was pursuing a policy of aggressive nationalise saying it was Western powers which were trying to foment a new cold war. “It’s Western countries, headed by United States, they started this so called new cold war on China,” he said.

“They have the sanctions, they have these smearing, name calling, take what happened with the coronavirus. “They still keep calling China virus, Wuhan virus. Totally wrong. “But we have to make a response. We do not provoke but once we were provoked we have to make response.”–PA