Some 2,000 relatives attend unveiling of memorial in the Netherlands 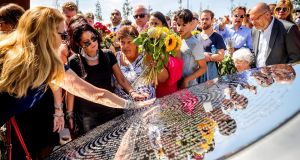 Relatives of the victims of the Malaysia Airlines crash in Ukraine in 2014 look at the names on the memorial during an event to commemorate the disaster in Vijfhuizen, Netherlands. Photograph: Reuters/Remko de Waal/Pool

On a crisp summer day, poignantly reminiscent of the one on which Malaysia Airlines flight MH17 was blown out of the sky over eastern Ukraine three years ago, some 2,000 relatives of those who died attended the unveiling of a memorial by the king and queen of the Netherlands on Monday.

The passenger jet, which was packed with Dutch holidaymakers, including 80 children and three infants, was en route from Amsterdam to Kuala Lumpur when a Russian-made Buk missile exploded less than a metre from the cockpit. The aircraft hit the ground at 4.20pm on July 17th, 2014.

The memorial, at Vijfhuizen near Schiphol airport, where Flight MH17 began its final journey, comprises a “forest” of 298 trees, one named for each of the victims, planted in the shape of a ribbon – to commemorate the black ribbon worn by mourners after the catastrophe.

Surrounding the forest is a ring of sunflowers grown from seeds gathered from the fields in Donetsk in which the jet – which had been cruising at about 30,000ft – broke up over an enormous area of some 50 sq km.

At the centre of the monument is an upward-looking steel eye, 16m wide, which the memorial’s designer, Ronald Westerhuis, said represented “the transience of sadness”.

“When it’s raining, you will see the tracks of the rain on the metal surface”, Westerhuis explained. “And over time the steel will rust. Its colour today is transient – just as I hope that to some extent, as time passes, the relatives’ sadness will be transient as well.”

The memorial was unveiled by King Willem-Alexander, who was accompanied by his wife, Queen Maxima. The Netherlands’ prime minister, Mark Rutte, took time off from day 121 of talks on a new coalition government to attend, with caretaker foreign minister, Bert Koenders.

There were 17 nationalities on the flight – and family members read the names and ages of each of the deceased, passengers and crew, in a tribute which, even three years on, remained a heart-breaking catalogue of loss.

Each of the “grieving nations” was represented by members of its diplomatic corps, including Ireland by ambassador Kevin Kelly.

Amongst those who died in the crash was mother-of-two, Edel Mahady, from Palmerstown, Co Dublin, who had emigrated to Perth some 20 years ago and was returning home from visiting her elderly mother in Ireland.

1 The far right rises: Its growth as a political force in Ireland
2 Coronavirus: Public health experts considered idea of moving Dublin to Level 4
3 Coronavirus: From midnight Dublin will move to level three until October 10th - Taoiseach
4 President Higgins says British must face up to their history of reprisals
5 Why are some in Fianna Fáil unhappy with Micheál Martin?
Real news has value SUBSCRIBE