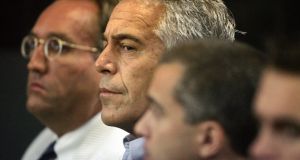 Jeffrey Epstein, centre, His expected to appear before a federal magistrate Monday, more than a decade after he gained notoriety for lurid accusations that he paid dozens of girls for sexual massages in Florida. Photograph: Uma Sanghvi/Palm Beach Post via AP, File

Jeffrey Epstein, a billionaire New York financier long accused of molesting dozens of girls, was arrested Saturday and charged with sex trafficking by federal prosecutors, an extraordinary turn of events in a long and sordid criminal case.

Two people with knowledge of the charges said on Saturday night that Epstein had been arrested in the New York area and was in federal custody.

He is expected to appear before a federal magistrate Monday, more than a decade after he gained notoriety for lurid accusations that he paid dozens of girls for sexual massages in Florida.

Epstein had avoided federal criminal charges in 2007 and 2008 in a widely criticised plea deal whose lenient terms roil the Department of Justice even today.

Before the plea deal, Epstein, a former hedge-fund manager, had been friendly with Donald Trump, former President Bill Clinton and Prince Andrew, the Duke of York.

Mr Epstein pleaded guilty to lesser state charges of soliciting prostitution, served 13 months in a county lockup and registered as a sex offender. His jail arrangement allowed him to get out of the Palm Beach County Stockade six days a week to work out of his office.

The US attorney’s office in Manhattan, which brought the charges against Epstein, declined to comment Saturday night. CBS Miami reported that Epstein was arrested late Saturday afternoon at Teterboro Airport in New Jersey after he arrived by private jet from Paris. He was taken into custody by federal agents. The television station said Epstein was arrested under a sealed federal indictment and charged with one count of sex trafficking and one count of conspiracy to commit sex trafficking. Defence lawyers for Epstein could not immediately be reached for comment.

Women who said they were Epstein’s victims have repeatedly assailed federal prosecutors for agreeing to a nonprosecution deal with him more than a decade ago. Jack Scarola, a lawyer for two of the women, said he had not been informed of the arrest. “But given his extensive pattern of past criminal conduct and the apparent addictive nature of his aberrant behaviour, an arrest comes as no surprise,” Mr Scarola said Saturday night.

According to court records, in a 2007 interview with the FBI, one girl shared that at age 15 she began visiting Epstein and gave him massages, both in her underwear and then nude, for $200 each. Over time, the encounters became increasingly sexual. Epstein also got the girl to bring other girls who worked with her at a local strip club. The plea deal that protected Epstein from federal charges was signed by the top federal prosecutor in Miami at the time, Alexander Acosta, who is now labour secretary.

In February, a judge in Florida ruled that the prosecutors led by Acosta violated federal law when they failed to disclose Epstein’s nonprosecution agreement to his victims. The agreement was negotiated in secret while victims were told prosecutors were still pursuing a possible federal criminal case.

Mr Acosta has defended the handling of Epstein’s case, saying the plea deal sent Epstein to jail and guaranteed that he would register as a sex offender. But lawyers for his victims have fought for years against a punishment they saw as too lenient. The case received new public scrutiny after an investigative report published by the Miami Herald in November quoted four of Epstein’s victims, who are now adults, on the record for the first time.

One of the victims, Courtney Wild, now 31, was wearing braces when she first met Epstein. “Jeffrey preyed on girls who were in a bad way, girls who were basically homeless,” Ms Wild told the Herald. “He went after girls who he thought no one would listen to and he was right.”

Investigators had identified more than 30 victims. The Herald said it located about 60. In February, the US justice department said it had opened an investigation into the nonprosecution agreement. The inquiry is reviewing whether prosecutors committed professional misconduct in their handling of the Epstein case. – New York Times Service