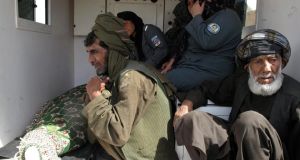 Relatives and police women sit in the back of an ambulance transporting the body of a senior female police officer for burial in Helmand province. Photograph: Abdul Malik/Reuters

Southern Afghanistan’s top policewoman has died after being shot in an ambush, months after her predecessor was murdered.

Her death, one of the latest in a string of attacks on prominent Afghan women, could make it even harder to recruit female officers in a deeply conservative nation where just one per cent of the police are women.

Sub-Inspector Negar, who like many Afghans uses only one name, was buying grass for her lambs outside her home in Helmand province yesterday when two gunmen rode up on a motorbike and fired at her.

Ms Negar’s funeral was attended by colleagues and family members, many vowing revenge on the attackers.

The Taliban are believed to be behind many of the recent assaults on Afghan women.

Ms Negar was the top policewoman in Helmand, and worked in its criminal investigation department in Lashkar Gah city. She had taken over the duties of Islam Bibi, a police officer shot dead in July by unknown gunmen. Ms Bibi said her own relatives had threatened her for having the job.

Officials have given different ages for Ms Negar, including 35 and 38, and varying accounts of her work history. But her son-in-law, Faizullah Khan, said she was 41 and had two children, a son and a daughter, and that she worked for the police in the early 1990s before the Taliban movement took over the country and banned women from jobs.

Her son, police officer Hamid Khan, vowed to find her killers. “I will serve my elders and people, my sisters and my brothers till the last drop of blood in my body. They should not believe that it is the end,” he said.

Ms Negar’s family has had several police officers, including her son, and a brother and her relatives had not objected to her work, the son-in-law said. However, she had been getting phone threats from people claiming to be with the Taliban, who have been waging an insurgency since being topped in 2001.

Female police officers seem to be a favorite target and several have been threatened or killed in the past few years.

The female officers, especially in the deeply conservative southern provinces, face numerous challenges, including disapproval from their own families. Many also face sexual harassment and assault by male colleagues. And some are given menial tasks such as serving tea.