Syrian peace talks to begin in Geneva on anniversary of conflict 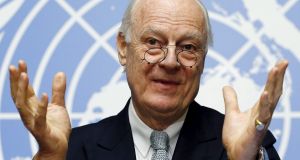 UN mediator for Syria Staffan de Mistura: Kurds have a right to be included in future talks. Photograph: Denis Balibouse/Reuters/Files 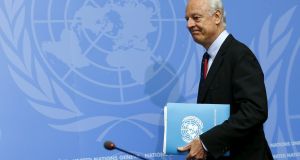 Syrian peace talks are set to begin on Monday in Geneva as Syrians mark the anniversary of the start of an uprising that became a civil conflict and a proxy war between competing regional and international powers, killed 250,000, displaced half the population and devastated the country.

The timing is seen to be not only appropriate, since the talks coincide with the fifth anniversary of unrest, but also propitious because a two-week-old ceasefire has reduced violence by 80-90 per cent and humanitarian aid has been delivered to 250,000 civilians trapped in hot zones.

Like the first round at the end of January, these discussions are to be mediated by Swedish-Italian UN envoy Staffan de Mistura, who has said the talks will last until March 24th, break for consultations and resume 10 days later. Government and Saudi-backed High Negotiations Committee (HNC) delegations will not, at this stage, hold face-to-face discussions. Mr de Mistura will shuttle between them.

Representatives of a women’s advisory council and civil society associations have been meeting in Geneva since March 10th. Although the most effective force fighting Islamic State, the Kurds have not been invited to the talks, due to Turkish opposition. Mr de Mistura has said they have a right to be included in future discussions.

He has said the “three point agenda” involves the formation of a transitional authority with full executive powers, adoption of a new constitution and elections on August 18th, 2017. The main point of contention is president Bashar al-Assad’s role.

Syrian foreign minister Walid Muallem insists his presidency is a “red line” forDamascus. He must remain in office until elections are held and might stand for a new term. The government is, however, under strong pressure from its key allies, Russia and Iran, to find a formula on the Assad issue acceptable to western powers which have influence with the HNC. His presence through the transition period is seen by some as essential for the preservation of the military, state institutions and stability until a new regime is in place.

The HNC argues he and his inner circle must step down before the transition period begins. According to a source close to the 97-member coalition, the HNC will refuse to discuss anything but Dr Assad’s removal.

Mr Alloush is chairman of the politburo of the Saudi-sponsored Army of Islam founded by a cousin who was killed in a government air strike in December. Mr Alloush says the “transitional period should start with the fall or death of Bashar al-Assad”.

The divided and Saudi-dependent HNC is under pressure from the US and Europe to engage in serious negotiations with the aim of ending the conflict and stemming the tide of Syrian refugees sweeping across Europe’s southern shores and threatening to fracture the 28-member EU. The HNC is under counter-pressure from Riyadh and its ally Ankara which refuse to budge from their demand for Dr Assad’s early ouster.

While paying lip service to assurances that Syria will remain a secular, pluralistic state, Saudi Arabia and Turkey support armed opposition factions – Army of Islam and its ally Ahrar al-Sham – that seek to transform the country into a Sunni Islamic state governed by Muslim canon law, Sharia.

While these delegations exchange views via Mr de Mistura in Geneva, separate teams will assess the viability of the ceasefire and seek to gain humanitarian access to out of reach areas.