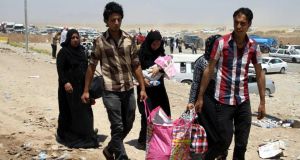 Iraqis fleeing the violence in Mosul arrive yesterday at a checkpoint in Erbil, in the Kurdistan region in north Iraq. Photograph: EPA/Kamal Akrayi

Sunni militants who overran the northern Iraqi city of Mosul as government forces crumbled in disarray extended their reach in a lightning advance yesterday, pressing south towards Baghdad. They occupied facilities in the strategic oil-refining town of Baiji and seized the city of Tikrit with little resistance, security officials and residents said.

By late last night there were unconfirmed reports that the Sunni militants, many aligned with the radical Islamic State of Iraq and Syria (Isis, also known as the Islamic State of Iraq and the Levant), were battling loyalist forces at the northern entrance to the city of Samarra, about 113km (70 miles) north of Baghdad. The city is known for a sacred Shia shrine that was bombed in 2006, during the height of the US-led occupation, touching off bitter sectarian mayhem between the Sunni minority and Shia majority.

Word of the latest advance came as a UN agency reported that 500,000 people had fled Mosul – Iraq’s second-largest city, with a population of about two million – after the militants, spilling over the border from Syria, captured military bases, police stations, banks and provincial headquarters.

Yesterday, insurgents also raided the Turkish consulate in Mosul and seized the consul general and 47 other Turkish citizens, including special-forces soldiers and three children of diplomats, the Turkish prime minister’s office said. The development raised the possibility that Turkey, a Nato ally that borders both Syria and Iraq, would become directly entangled in the fast-moving crisis.

Turkish prime minister Recep Tayyip Erdogan was holding an emergency meeting with top security officials yesterday to discuss the crisis, while the Turkish foreign minister cut short a trip to New York and was returning to Ankara.

Turkey has long taken an interest in northern Iraq for economic reasons and because of the sizable and often restive Kurdish minority, which straddles the border and controls a region of Iraq east of Mosul.

Amid the collapse of the Iraqi army in Mosul, Tikrit and other northern cities, questions began to be raised about the possibility of a conspiracy in the military to deliberately surrender.

Witnesses reported remarkable scenes in Tikrit, where soldiers handed over their weapons and uniforms peacefully to militants who ordinarily would have been expected to kill government soldiers on the spot.

Iraqi prime minister Nouri al-Maliki, a Shia Muslim, himself suggested the possibility of a disloyal military in his call for citizens to take up arms against the Sunni insurgents.

Citizens in Baiji, a city of 200,000 about 178km (110 miles) south of Mosul, awoke yesterday to find that government checkpoints had been abandoned and insurgents, arriving in a column of 60 vehicles, were taking control of parts of the city without firing a shot, security officials said. Peter Bouckaert, emergency services director for Human Rights Watch, said on Twitter that the militants had seized Baiji power station, which supplies electricity to Baghdad, Kirkuk and Salahuddin.

In Tikrit, famous as the hometown of Saddam Hussein, residents said the militants attacked in the afternoon from three directions: east, west and north. Residents said there were brief exchanges of gunfire, and then police officers and soldiers shed their uniforms, put on civilian clothing and fled through residential areas to avoid the militants, while others gave up their weapons and uniforms willingly.

Though the city seemed calm, residents said they were shocked by the news and feared that Isis would push on towards the capital. Shia militias and security forces loyal to the Shia-led government of Mr Maliki were on high alert, and residents in Baghdad began stockpiling food, fuel and small arms in fear of a rebel assault. A senior provincial official said authorities had a plan to recapture Mosul, according to reports, but it was unclear how.

Yesterday, the insurgents claimed to have taken control of the entire province of Nineveh, AFP reported, and there were reports of militants executing government soldiers in the Kirkuk region. Atheel al-Nujaifi, governor of the province, criticised the Iraqi army commanders in Mosul, saying they had misled the government about the situation in the city.

The swift advances offered a milestone in Iraq’s unravelling since the withdrawal of US forces at the end of 2011. The rising insurgency also presented a quandary for the Obama administration, which has faced sharp criticism for its recent swap of five Taliban officers for Sgt Bowe Bergdahl and must answer questions about the death of five Americans by friendly fire in Afghanistan on Monday.

Critics claim the US withdrawal from Iraq, without leaving even a token force, invited an insurgent revival. – (New York Times service)