Six Day war: By June 10th, Israel had possession of all of Palestine

Lives were changed forever on June 5th, 1967, as Israel’s air force won the war in hours

June 5th marks the 50th anniversary of the Six-Day War between Israel, Egypt, Jordan and Syria, an event that would shape the Middle East for the resulting five decades. Video: Reuters 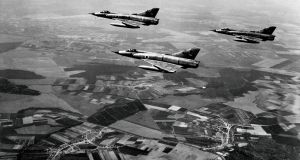 Israeli air force fighters over the Sinai peninsula on the first day of the Six Day war. On the morning of June 5th, 1967, Israeli planes destroyed the entire Egyptian air force on the ground. Photograph: AFP Photo

On the morning of June 5th, 1967, Israeli war planes destroyed the entire Egyptian air force on the ground, winning the Six Day war in its first hour.

At 10am that day, Jordanian artillery opened up on Israeli army positions in West Jerusalem. Israel responded with bombardment and a ground offensive. The eastern sector of Jerusalem, ruled by Jordan, was captured by Israel over the next 48 hours.

By June 10th, the West Bank and Gaza had fallen, leaving the Israelis in possession of all of Palestine as well as Egypt’s Sinai peninsula and the Syrian Golan Heights.

The Arab world was stunned by a defeat which left Palestinians facing at least 50 years of – continuing – Israeli occupation.

“They called on us to help when the war broke out. They gave us a quick, two-hour course in first aid and sent us to treat injured people. On the first day there were not many, but on the second day, when the bombardment of Ramallah began, we saw so much blood. Many people were killed and injured.This is why I became a doctor.”

Barghouti is head of the Palestinian Medical Relief Committees, an organisation that has trained 80,000 volunteers in first aid.

“The experience of bombardment was loud and frightening. For months I felt nervous when I heard a loud noise...I felt the whole responsibility for Palestine was on my shoulders. I was no longer a child. I engaged in political activity.”

He and other students called for a boycott of Israeli goods, distributed leaflets and put posters on the walls on anniversaries of the war.

“The war was a turning point. The positive aspect of June 5th was that most people stayed. This was the greatest achievement of the Palestinian people. My father said it is better to die here than lose our dignity and become refugees.”

There was no mass flight comparable to the Palestinian exodus of 1948-49 following Israel’s war of establishment.

Mahdi Abdul Hadi, then a 23-year-old second year student of law at Damascus University, had returned to Jerusalem at the end of May 1967 to look after his parents.

“We did not expect war in May, but thought it might come during the summer vacation. My father was a retired judge and a member of the upper house of [the Jordanian] parliament. We lived in a large house so three neighbouring families moved in and took shelter in the salon.

“We put mattresses against the large windows for blackout and followed events minute-by-minute on Egypt’s Voice of the Arabs [radio service].”

The Egyptian government claimed that Palestinians would return to Haifa and Jaffa, lost to Israel 19 years earlier, and announced Israel’s defeat – even if it was the Arab armies that had been defeated. “We were shocked, humiliated, in tears,” said Abdul Hadi.

The Israelis imposed a curfew and called on civilians to hand in guns. Abdul Hadi broke the curfew several times to get food from the Ritz Hotel near his home. It was empty of guests and abandoned by staff, its doors open, swinging in the wind.

During the first week of July, he crossed the Jordan river and went to Amman, the Jordanian capital, to get money and medicine for his ailing mother before paying smugglers a hefty fee to get him back across the river into the West Bank. “I waded in water up to my waist, spent the night in Jericho, and went to Jerusalem the next day.”

He resumed his law studies in Damascus, took his degree and returned home to a clerkship. In 1987, Abdul Hadi founded the east Jerusalem-based Palestinian Academic Society for the Study of International Affairs to promote research and dialogue.

Widad Kawar was living with her husband and children on Rainbow Street in Amman when the war broke out. Her father, Jalil Irani, born in the late 1800s, had travelled from Bethlehem to see off her brother and nephew who were set to fly to the US.

Her mother remained in Bethlehem, where a neighbour and his son were killed by a bomb on June 6th. Kawar and other alumnae of the Beirut College for Women formed a committee to help mothers and children burned by Israeli napalm bombs as they were trying to cross into Jordan.

In co-operation with the YWCA and the UN Relief and Works Agency for Palestinian refugees, the women collected clothing for the 300,000 refugees who crossed into Jordan, provided chairs and desks for kindergartens for the influx of children, and training in embroidery and cooking for the women.

Kawar’s father, a graduate of the American University of Beirut who had headed a boys’ reform and vocational school in Bethlehem, “went every day to the Red Cross or the embassies” to demand permission to return home to Bethlehem. “It took seven months and he was one of the first,” she says.

Kawar has made a vast collection of traditional Palestinian dresses, embroideries and handicrafts with the aim of preserving her people’s national heritage. She established a museum in Amman to display the collection.

As his mother, Marie, is a French citizen, Neshan Balian’s family was warned by the French embassy in Amman to go to Jordan. “We left on June 4th. My father and mother, brother, sister and me.” Balian, nine at the time, recalled seeing Jordanian tanks and armoured troop carriers coming toward Jerusalem.

“While we huddled with relatives there was a dogfight between an Israeli Mirage and a Jordanian Hawker Hunter [both fighter jets]. My mother told me, ‘go back to the basement’, so I didn’t see the end. My father drove us to Beirut where we [mother and children] took a Turkish ship to Marseille. People were listening to the latest news on the Voice of the Arabs.”

His father hurried to Amman after learning his property in Jerusalem would be confiscated if he was absent. With three friends, he attempted to cross the Jordan river at a point where the water was low.

“They got stuck in the mud and had to push. Fortunately, my father was wearing polyester trousers that dried quickly. When they were stopped by the Israeli army, the three others, whose cotton trousers were wet, were sent back. To get through the checkpoints en route to Jerusalem, my father picked up [hitchhiking] Israeli girl soldiers.”

In Jerusalem he found his ceramics factory and showroom had been destroyed by an Israeli tank shell fired from close range and his house had been holed by a mortar. But there was an undamaged kiln filled with fired pottery.

Determined to stay on at the premises, which had been opened in 1922 when the British colonial authorities imported Armenian potters to the holy city to make tiles for the splendid Muslim shrine, the Dome of the Rock, Balian senior cleaned up the building and set out the surviving ceramics. They were snapped up by Israeli clients who had been cut off since 1948 when Jerusalem was divided between Jordan and the new state of Israel.

“To get his ID [identity card] my father had to prove he was in Jerusalem during the war. Instead he received his ID granting residency for three years after showing [the Israelis] a letter he had from [US senator] Ted Kennedy who had visited the pottery. We still have to renew our residency every three years. Even my children who were born here. This is a legacy of 1967.”