Ariana Grande back on stage at One Love Manchester concert

Singer performs at benefit event as Bono tells crowd: ‘All our hearts are with you’

U.S. pop singer Ariana Grande headlined a star-studded benefit concert in Manchester on Sunday (June 5) in aid of victims of the bombing that rocked the city last month. Video: One Love Manchester 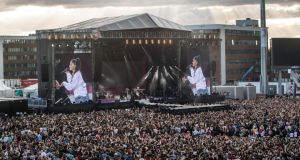 Ariana Grande had just left the stage at Manchester Arena on May 22nd when a suicide bomber detonated a nailbomb in the foyer, killing 22 people and injuring 116 others. She left Britain “broken, from the bottom of my heart”, and could have been forgiven for hiding herself away.

Instead, less than two weeks after the attack, the 23-year-old American singer was back, headlining a benefit show on Sunday night for 50,000 fans at Old Trafford cricket ground, just 3km from the arena.

The London attacks on Saturday did not deter her: she would play with “greater purpose”, her manager said before the show. Victims and survivors would be commemorated “with courage, bravery and defiance in the face of fear”.

One Love Manchester, pulled together in scarcely a week, drew some of the biggest names in pop playing for free, including Justin Bieber, Coldplay and Katy Perry. It began with a minute‘s silence led by Marcus Mumford, the frontman of Mumford & Sons, and the words: “Let’s not be afraid, Manchester.”

He gave way to the Manchester band Take That, who in turn introduced “our friend, our brother” Robbie Williams. He changed the lyrics of his 1998 hit Strong so the chorus ended up with a mass singalong of “Manchester, we’re strong, we’re stro-ong, we’re stro-o-o-ong.”

Pharrell Williams kept up the good mood by opening with Get Lucky, one of the biggest-selling singles of all time. “I don’t see, hear or smell any fear here this evening. All I feel is love and positivity,” he said before duetting on Happy with Miley Cyrus.

Bono had earlier sent a video message. The U2 frontman told the crowds: “All our hearts are with you, all our hearts are with Manchester and with the UK. So many of our friends are in this great city. We’re broken-hearted for parents who’ve lost their children and children who’ve lost their parents in this senseless, senseless horror. There is no end to grief, and that’s how we know there is no end to life.”

Despite some in the crowd wearing flashing bunny ears and Sex Pistols-esque T-shirts declaring “Never mind the terrorists, we’re Manchester”, there was a subdued atmosphere on the covered cricket pitch. Eyes darted left and right, nails were bitten. A sudden puff from a smoke machine caused a ripple of unease among the crowd.

Thousands of those present had been at Manchester Arena on May 22nd. Some, like eight-year-old Lily Harrison, had been badly injured, along with her mum and dad. She took a special bus from the Royal Manchester children’s hospital, determined to be in the crowd, along with two other children from her ward.

She had promised Grande that she would be there, when the pop star turned up at her bedside on Friday night, unannounced. The little girl was determined to be at the concert, despite the pain from shrapnel that had torn through one of her shoulder blades.

Everyone who could prove they had been at the arena gig was invited to apply for free tickets. Just over 14,000 people were at the original show, yet 25,000 people applied for freebies, a state of affairs described as “absolutely disgusting” by 19-year-old Finlay, who had come back with three friends from Blackburn, in Lancashire.

A few days after witnessing the attack Finlay got a tattoo of a Manchester worker bee. Tattoo artists all over Greater Manchester have been inking the city’s symbol for £50 (€60) a pop since the attack, with all proceeds going to the We Love Manchester appeal.

Also in the crowd was Molly Baigent, an 18-year-old Ariana Grande superfan. She has been a member of the star’s fan club for six years and met her idol in 2012: a signed T-shirt and framed photograph of the pair together adorn her bedroom wall.

The Manchester Arena concert was the first time she had seen the pop star live. It ended with her being 30m from the bomber. “It was terrifying,” she said on Sunday. “As soon as our feet hit the foyer we heard this bang go off. The first reaction was, ‘Has a light gone off?’ but deep down I knew it was a terrorist attack.”

Molly’s mother, Sarah, said: “When we got to the top of the stairs, and we were about to to go out, I said to Molly, ‘Go left,’ but at the last minute I said, ‘Go right.’ I feel so lucky.”

It was that split-second decision that most likely saved their lives.

“I’m not going to forget the sights and sounds I heard that night,” said Molly. “I’ve reflected on it, and the other Sunday I woke up having never experienced a terror attack. Then I woke up Tuesday morning having experienced that.”

Molly was determined to go to see her idol again but said she felt sick and terrified all weekend thinking about it. Her mother said loud noises have scared her every day since the incident.

Molly said she began to well up as they pulled up in the car park before Sunday’s concert.

“It all feels very surreal to be here. I genuinely felt I wouldn’t be able to be here and I’d have to watch it on television – but to be here is giving us some closure.”