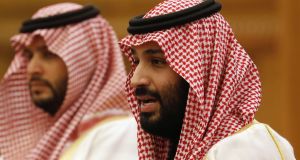 Mohammed bin Salman: The rate of arrests, repression and executions has significantly increased under his rule. Photograph: How Hwee Young/AFP/Getty Images

Reports in recent days suggest that the previously unassailable position of the crown prince of Saudi Arabia, Mohammed bin Salman, might be coming under threat.

There are suggestions that his father, King Salman, did not approve of recent moves, including his son’s appointment of a new ambassador to the United States to replace his brother who became deputy defence minister.

Much was also made of crown prince’s “failure” to turn up at the airport to welcome the king home from a February summit of Arab and European leaders in Sharm al-Sheikh in Egypt. There have also been reports that the crown prince failed to attend recent cabinet meetings over which the king presides as well as a number of other high-profile events, including meetings with the head of the World Health Organisation, the prime minister of Lebanon and the ambassadors of China and India to Saudi Arabia.

Officially, the Saudis deny any involvement in the death of Jamal Khashoggi. However, the CIA has largely concluded that the crown prince personally ordered the killing.

In response, it is reported, the king has moved to restrict his son’s financial and economic powers, while a newly-appointed national security adviser, Musaed al-Aiban, a confidante of the king, will oversee decisions on foreign investments.

Prince Mohammed rapidly ascended to a position of great power in the kingdom when his father, Salman, became king in January 2015. Initially, he was appointed minister of defence and was then designated heir to the throne in June 2017. He subsequently embarked on a number of initiatives designed to foster a reforming image at home and abroad.

However, a series of events had brought his behaviour under severe scrutiny. First was the near farcical kidnapping and enforced resignation (quickly withdrawn) of the Lebanese prime minister, Saad Hariri in November 2017. This was followed, later in the same month, by the detention in the Ritz Carlton Hotel in Riyadh of hundreds of members of the royal family and other prominent public figures in what was described as an anti-corruption drive.

Much worse was to come when the crown prince was linked to the murder of Saudi journalist, Jamal Khashoggi, in the Saudi consulate in Istanbul, in October 2018.

Officially, the Saudis deny any involvement in his death. However, the CIA has largely concluded that the crown prince personally ordered the killing.

The brutal nature of the murder led to international condemnation and focused attention on the crown prince’s role in the Saudi-led military assault on neighbouring Yemen which has caused tens of thousands of deaths and left the country on the brink of humanitarian devastation.

In February of this year, the United States Congress appeared to increase the pressure on the crown prince, approving a resolution that would force the US to withdraw troops from involvement in the Yemeni conflict. Increased scrutiny has led to other shocking revelations concerning Bin Salman’s approach to political opposition.

Despite reforms such as removing the ban on women driving, the reintroduction of cinemas and musical performances – previously deemed immoral – and the relaxation of gender segregation, the rate of arrests, repression and executions has significantly increased since his father became king.

More than 2,600 Saudi dissidents have been imprisoned while a recent New York Times report directly linked the crown prince to a covert Saudi death squad involved in the detention and abuse of women’s rights activists which operates in palaces belonging to the king and his father. The newspaper reported that the death squad was worked so hard it asked for holiday bonuses last year.

Despite all of this, the notion that crown prince’s grip on power is under serious threat may be greatly overstated. There has been significant disapproval of some of his actions and the Saudi assault on Yemen has been reined in, if only for the present. However, his political obituary is not about to be written.

Close links between Trump's administration and the Saudi royal family persist to the extent that Prince Mohammed boasted in 2017 that he had Jared Kushner, in his 'pocket'

As critics of the royal family have noted, if King Salman wanted to express real displeasure at the murder of Mr Khashoggi, a tour of the kingdom with his son by his side was an unusual way of showing it. Indeed, his official response was merely to insist on a Saudi investigation of Mr Khashoggi’s death, the same position adopted by his son.

Nor has the crown prince got much to gain by challenging his father or appearing to threaten his position; given the king’s advanced ill-health, he is already king in all but name. Since his appointment as crown prince, he has consolidated his power by bringing the internal security institutions of the state under his effective control which makes it difficult for any internal faction to challenge him.

International pressure, too, appears to be waning. An initially assertive European response to the murder of Mr Khashoggi saw the foreign ministers of France, Germany and the UK unite in a demand for a “comprehensive, transparent and credible” investigation of the killing. More recently, however, France and the UK have placed pressure on Germany to reverse an arms embargo on the kingdom.

Meanwhile, close links between the Trump administration and the Saudi royal family persist to the extent that Prince Mohammed boasted in 2017 that he had the president’s son-in-law, Jared Kushner, in his “pocket”.

The crown prince’s position is, in reality, much stronger than the rumours of recent weeks might suggest.