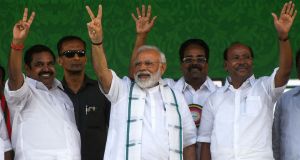 India will hold its general election in seven stages, starting on April 11th, in what will be the world’s largest democratic exercise to elect a new federal government.

Chief election commissioner Sunil Arora said some 900 million Indians are eligible to vote electronically in the polls for 543 Lok Sabha or elected lower house seats, the results of which will be announced on May 23rd.

Mr Arora said there would be more than 1.03 million polling stations, guarded by large numbers of police and paramilitary personnel to guarantee “free, fair and peaceful elections”.

He also said that all social media platforms would be strictly monitored before and during elections in an attempt to crack down on fake news. If any “untoward incident or violation of any law is noticed [on social media] action would be taken immediately”, he added.

The election commission has also instituted a separate team to monitor the expenditure of political parties after a record spend of €4.5 billion in the 2014 polls.

India’s Centre for Media Studies estimates that this amount is expected to double this time round, as the electoral battles promise to be far more severe.

Prime minister Narendra Modi’s Hindu nationalist Bharatiya Janata Party (BJP) is running against the principal opposition Congress Party and a host of regional parties, some of which have forged electoral alliances ahead of voting. The winning party or coalition will need to secure 272 seats to form a government.

In the 2014 polls the BJP won 282 seats, securing India’s first single-party parliamentary majority after 30 years of federal coalitions. Along with its National Democratic Alliance partners the BJP had a record 336 MPs in parliament.

At the time the BJP’s staggering victory was attributed largely to Mr Modi’s indefatigable campaigning and his catchy slogans of “vikas”, or development, “better times” and a corruption-free administration, promising a break from the previous 10 years of Congress Party rule.

The 133-year-old Congress Party, which was in power for nearly 50 years after India’s independence in 1947, slumped to its lowest ever tally of 44 MPs in 2014 and is desperately hoping to resurrect itself in the upcoming polls.

But Mr Modi’s popularity is soaring after he ordered air strikes against an alleged Islamist militant training camp in neighbouring Pakistan, which took responsibility for killing 40 Indian paramilitaries in the disputed northern state of Kashmir.

“By projecting national security and a muscular nationalism as his main electoral plank, Modi seems to have whitewashed all that he was unable to achieve on the economic, social and foreign policy front in the past five years,” said Seema Mustafa of the Centre for Policy Analysis in New Delhi.

The opposition parties accuse the BJP of creating sectarian divisions in the name of Hinduism.