Refugees and Jordanians forced to compete for scarce resources 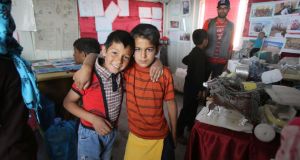 Before the conflict in Syria emptied hundreds of thousands of refugees into Jordan, the kingdom’s government had made projections of population growth for 20 years.

This was reached in 20 months, says Aoife McDonnell, external relations officer of the UN High Commissioner for Refugees (UNHCR). The agency has registered 650,000 Syrian refugees in Jordan, 10 per cent of the population. The Jordanian government, however, estimates there are 1.4 million Syrians in the country, including 750,000 who were there before the crisis began.

About 110,000 Syrians in Jordan are in camps. Many others live in poor areas such as Mafraq, Irbid and Zarka where pressure on resources and public services has grown dramatically. Some 85,000 refugees live at the main Zaatari camp which was put on one of Jordan’s major water tables east of Mafraq, an economically depressed provincial desert city.

“Water is a massive problem,” says McDonnell, “as Jordan is the third most water-poor country in the world.” Over-pumping from the kingdom’s aquifers could lead to their exhaustion by 2060. Ill-fitting pipe connections “lose up to 40 per cent in some areas”. The UNHCR has invested $6 million (€5.3 million) in repairs to the system.

“The water situation has been exacerbated for the entire country” where water has for many years been “in a state of crisis”, says McDonnell, who is from Cork. When she arrived here three years ago, water flowed to homes in Amman twice a week; today it is delivered once a week.

“The situation is worse outside Amman. In Karak there is no water,” she adds.

McDonnell says refugees in Zaatari camp, aware that they will not be returning to Syria any time soon, built their own toilets beside their tents rather than use communal ones. They also established waste canal networks that carried away grey water.

Since this system was a health hazard, UNHCR and Unicef have, in co-operation with the Yarmouk Water Company, built a waste-water system. This has caused concern as Jordanians fear the permanent settlement of hundreds of thousands of Syrians will change the socio-cultural, political and communal character of the country.

At least half of Jordan’s population of 6.5 million consists of Palestinians who arrived during Israel’s 1948 war of establishment and after Israel occupied Gaza, East Jerusalem and the West Bank in 1967. Up to half a million have come to Jordan from Iraq since the 1990s.

In addition to the soaring demand for water delivery and sewage disposal, refuse has become a major problem.

While drawing up the plan, its authors had to consider that nearly a quarter of refugee families are headed by women and almost 53 per cent are children, 18 per cent of whom are aged under five.

Two-thirds of Syrian refugee households in urban areas live under the poverty line; one-sixth are below the abject Jordanian poverty line.

Ireland has donated €800,000 to the UNHCR in Jordan to help the refugees. The total response plan budget is nearly $3 billion of which $1.144 billion has been designated for subsidies for Syrian refugees, security support and dealing with infrastructure depreciation. The largest items in the budget – which includes assistance for Syrians – are water, sanitation and hygiene, education, health, food security and social protection.

As the refugee problem has swollen, competition with locals for scarce resources has increased, posing a security risk.