Rebels leave last district of Homs in truce with Assad 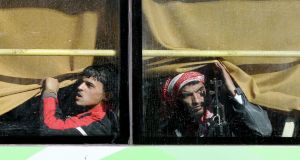 Syrian rebel fighters leave the last opposition-held district of al-Waer in the city of Homs under a deal with the Syrian regime. Photograph: AFP/Getty Images

Rebels are leaving their last stronghold in the Syrian city of Homs in a truce that gives president Bashar al-Assad control of what was known as the capital of the revolution.

A UN-mediated deal between the opposition and Damascus allows fighters who accept the truce to stay in the central Syrian city.

Rebels argue this is proof the deal is not a victory for Mr Assad, whose forces laid siege to the holdout district known as al-Waer for three years. Aid workers are being allowed to bring food and medicine to the area.

Foreign powers have been pushing to arrange more local truces in the hope they will pave the way for a political settlement between Mr Assad and the opposition.

Critics of the truces say they bolster the regime’s strategy of besieging areas and starving them into submission on Damascus’s terms, and doubt they will encourage the regime to make concessions. The agreement is largely symbolic because Mr Assad’s forces already control much of Homs as part of a strategy to consolidate their hold on Syria’s heavily populated centre.

In the early days of the conflict Homs became the centre of an armed revolt after Assad forces cracked down on protesters demanding an end to four decades of his family’s rule. Homs was a divided city for more than a year, until regime forces gradually began retaking territory, largely through a siege strategy.

Activists in al-Waer argue this truce is a sign of progress in local negotiations. “Al-Waer is still preserving its rebellious nature,” said Mohammed al-Sibai. We cannot say that al-Waer is back in the hands of the regime. We are still here.”

Video from the city showed green buses shuttling wounded and ill civilians as well as fighters and their families to a rebel-held area in northern Hama province.

The Syrian Observatory for Human Rights said that people were leaving in stages under the supervision of the Red Crescent, starting at 4am on Wednesday.

Most of the departing fighters are members of Jabhat al-Nusra, Syria’s al-Qaeda branch, and groups sympathetic to Isis, the group said.

It is unclear who will run the area once the final phases of the truce are complete.

Talal Barazani, governor of Homs, said last month that state police forces would patrol the area but rebels say this element of the deal has still not been agreed.