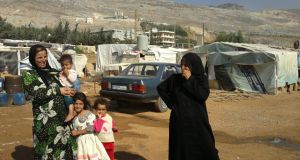 Ayas Ibrahim in the unofficial refugee camp at Eb Elias: “The UN does not register us. We get nothing.” Photograph: Hamzah Tahan

Abu Yasser boasts that his “non-camp” in Eb Elias is home to 3,000 refugees from every Syrian province.

Last spring there were about 500 people when the facility was just getting established. Lebanon has refused to create camps for refugees from Syria but permits them to set up unofficial “non-camps” where they are responsible for their own organisation and welfare.

Abu Yasser, named for the landlord, is one of many that have mushroomed across the wide Bekaa Valley that lies west of the border with Syria.

In April, residents were digging their first wells. Today there are wells for every three or four families and crude breeze block toilets for almost every household. Enterprising men have rigged stolen electricity from a nearby tower and run wires just beneath the surface of the sandy streets. Barefoot children risk shock and electrocution but there is light and television at night.

Chickens scurry between the “tents” – wooden frames covered by heavy plastic sheeting, some roofed in tin held in place by worn tyres. A goat peers yellow-eyed at the visitors from behind a pile of rubble.

Most of the men are out working or sitting on their heels at the roadside waiting for someone looking for a casual labourer. The women are washing clothes or hanging them, soggy and dripping, on lines strung between the tents. Water runs into the sandy roadway where children stand, stare and giggle.

Coupons and tent rent
Naif Abbas Abbas is a slender unshaven man who came nine months ago from the Salaheddin neighbourhood of Aleppo. “Three-quarters of the people here are registered with the UN, one-quarter not,” he says. “They give us coupons for 40,000 Lebanese liras [$23]. Only some supermarkets take them. We go to those where prices are low. The landowner asks us to pay 50,000 liras a month for each tent, 600,000 liras a year.” For homeless Syrians this is a huge sum. “If we don’t pay,” he says, Abu Yasser “will come with his sons and tell us to leave”.

Ahmed is small for 13. He comes from the Sheikh Maksoud district of Aleppo. He and his friends go out in the afternoons to the shops to pick out edible fruit and vegetables thrown into the garbage. “Do you go to school?” I ask Ahmed. He hangs his head. “I never went to school, not in Aleppo, not here.”

Fahd, a handsome boy with a wide smile, states, “I don’t go to school now but I did at home. I like school.”

“I do, too,” says Sireen, a girl with tangled, dusty hair and a striped top.

Down the road in the “non-camp” next to St Thomas Vineyard, Mohamed Ibrahim is lifting watermelons into his pick-up. He remembers me. “You came and took our numbers and promised to give them to someone who can help us. We got no help,” he asserts.

“I gave the numbers to a Syrian lady in Beirut who said she would come.”

His pregnant wife Ayas says: “The UN does not register us. We get nothing. Our neighbours do but we don’t. Our house in Idlib [in northwestern Syria] was destroyed, all our furniture, too. We know because we go and come back along the smuggling routes.

“I have 10 people in my family. Six children, my husband, his mother and sister. Even the clinic does not accept us.”

Amoun Mustafa Khalaf, a black-clad widow with three children, interjects: “I am a Kurd from Turkey married to a Syrian from Aleppo. I came two months ago and registered with the UN 20 days ago but I have received no coupons, nothing.”

About 500 people live here in the rectangular tents typical of the non-camps. A few small trees and bushes have been planted at the entrance to cheer the walk from the roadside to the tents.

In Zahleh, at the field headquarters of the UN High Commissioner for Refugees, Irish national Maeve Murphy explains that the Lebanese government counts as refugees Syrians who came after mid-March 2011, when the rebellion in Syria began. Mohamed, who has been working here for years, and his family are “non-refugees” living in a “non-camp”.

Refugee registration
Hundreds are waiting their turns at the registration office, formed into wobbly lines under a blue awning where their names are taken down by clerks in blue vests. Each applicant is interviewed in a cubicle at a next-door facility and issued with a document bearing family photos and granting them refugee status for two years. It takes a month to complete the process after the refugee submits his or her application for registration. The Zahleh centre handles about 1,000 people or 250 families a day.

As we swing up the highway to the mountain town of Aley, the car fills with the distinctive smell of refugee camps: night soil, sweat, damp clothing. There is dust which clings to clothes, skin and hair.

There only six Syrians seeking advice from the doctor at the Aley Relief Committee’s clinic established by Salma Chehayeb, wife of a local member of parliament, and sponsored by Nora Jumblatt, Syrian spouse of Walid Jumblatt, a leading Druze figure. The committee, established two years ago, offers medical treatment, food and schooling.

Samir Sayyed from Jobar, a suburb of Damascus, has come to get a referral from the doctor for one of his 18-month-old twin boys. His wife gave birth at seven months due to bombing and the boy was starved of oxygen. “He still doesn’t walk or talk, like his brother,” says Samir. “We waited 10 years for children. They were in vitro.”

“We will send him to a specialist and pay,” states Dr Hamed Shumait.

Samir, an unemployed shoemaker, and his family reside with an uncle. The UN gave him coupons for only one month. He sighs, “If I go home, I will be happy with just bread.”