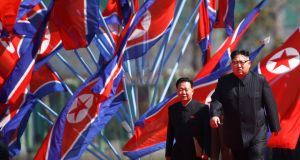 North Korea appears to be preparing to conduct a nuclear test in a show of defiance towards Donald Trump, who has not ruled out military action to pressure the regime into abandoning its nuclear weapons and ballistic missile programmes.

The US-based monitoring group 38 North said on Thursday that the satellite images from the North’s Punggye-ri site showed it was “primed and ready” for what would be the country’s sixth nuclear test since 2006.

“In the courtyards of the main administrative area are approximately 11 probable tarp-covered pallets of equipment or supplies, a formation of personnel, and several individuals walking about,” the site added.

South Korean officials, however, played down speculation that a nuclear test was imminent. “There has been no unusual activity so far,” Roh Jae-chun, a spokesman for the country’s Joint Chiefs of Staff, told reporters, according to Yonhap news agency.

The possibility that North Korea’s leader, Kim Jong-un, will again defy international opinion has strengthened since Pyongyang conducted a series of missile tests earlier this year, as it attempts to perfect a nuclear weapon capable of striking the US mainland.

On Thursday, foreign journalists in North Korea said they had been told to prepare for a “big and important event”, although it is unlikely that they would be shown around a facility as sensitive as a nuclear test site or missile base.

About 200 reporters, including those from Japan and the US, are in Pyongyang as the country prepares to mark the 105th birth anniversary of the birth of its founder, Kim Il-sung, on Saturday.

Some experts believe the regime is planning to conduct a missile launch or nuclear test to coincide with the anniversary, a hugely significant date in the North Korean calendar known locally as the Day of the Sun.

Journalists said that they had been woken before dawn and told to prepare for the trip, but were not given details of their destination. Previous events open to the foreign media have tended to be low-key, including a pop concert to mark the end of a ruling Korean Workers’ party congress.

Their visit coincides with a significant rise in tensions after the US sent an aircraft carrier strike group towards the Korean peninsula in a move many believe is designed to warn the regime off conducting missile or nuclear tests.

The USS Carl Vinson and its strike group are currently sailing north from Singapore, and are reportedly planning to conduct drills with Japanese self-defence force vessels en route to the waters off the Korean peninsula.

“We are sending an armada. Very powerful,” Mr Trump said on Wednesday. “We have submarines. Very powerful. Far more powerful than the aircraft carrier.”

Japan’s Nikkei business paper said on Thursday that the US had sent a “sniffer” plane to Japan to monitor any nuclear tests.

The aircraft, which has been used before to monitor North Korean rocket launches, has arrived on the southern Japanese island of Okinawa, the paper said, citing a Japanese self-defence force official.

A nuclear detonation would be the biggest test yet of Mr Trump’s more aggressive stance towards North Korea, coming soon after he warned that the US was prepared to address North Korea’s nuclear threat without help from China, the North’s biggest ally and economic partner.

Earlier this week Mr Trump tweeted: “North Korea is looking for trouble. If China decides to help, that would be great. If not, we will solve the problem without them! U.S.A.”

In a phone conversation with Mr Trump on Wednesday, China’s president, Xi Jinping, repeated calls for a peaceful resolution to the nuclear issue.

“China remains committed to the goal of denuclearising the (Korean) peninsula, safeguarding peace and stability on the peninsula, and advocates resolving problems through peaceful means,” the Chinese state broadcaster CCTV quoted Mr Xi as saying.

Mr Trump said on Twitter that he and Mr Xi had enjoyed a “very good” conversation about the “menace of North Korea”, and later praised China’s decision to send coal ships back to the North as part of UN sanctions against the regime.

An editorial in the Global Times, a tabloid linked to the Chinese communist party, warned that the recent US airstrike on a Syrian airfield lent greater weight to Mr Trump’s warnings that Washington would respond to any North Korean provocation with or without Beijing’s help.

“The Korean peninsula has never been so close to a military clash since the North conducted its first nuclear test in 2006,” it said, adding that Pyongyang “should avoid making mistakes at this time”.

The China Daily, however, adopted a more cautious tone. “The truth is that although the prospect of war may seem real, no party really wants a war,” the newspaper said. “Many sources indicate Washington is increasing the pressure in the hope that Pyongyang will change course without a shot being fired. Otherwise, it would not have insisted that Beijing could and should help rein in Pyongyang.”

The newspaper called on North Korea to refrain from conducting missile or nuclear tests at the weekend, and urged the US and South Korea to suspend joint military drills that Pyongyang regards as a dress rehearsal for an invasion.

Coupled with recent missile launches, a nuclear test could offer experts a better idea of how far North Korea is from being able to mount a miniaturised nuclear warhead on an intercontinental ballistic missile (ICBM).