Plight of boy not exceptional in Syria, says photographer

The child is reported to be five-year-old Omran Daqneesh, one of five children injured late on Wednesday by a military strike on the city of 300,000 - the site of the most decisive battle in the civil war. Video: Aleppo Media Centre 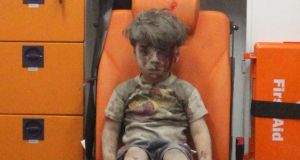 Five-year-old Omran Daqneesh, with bloodied face, sits inside an ambulance after he was rescued following an airstrike in the rebel-held al-Qaterji neighbourhood of Aleppo, Syria. Photograph: Reuters/Mahmoud Rslan

Sitting in an orange ambulance chair, Omran Daqneesh stared, bewildered, into the middle distance. He brought his hand to his face, covered in a paste of blood and dust beneath a shock of grimy hair, and stared at the red stain on his fingers, a look of quiet surprise on his face.

Minutes earlier, the five-year-old had been rescued from the rubble of his home in the rebel-held Aleppo neighbourhood of Qaterji after a government air strike. His emergence from the debris was captured by local journalists who filmed the rescue, and the ordeal of the boy and his family.

The pictures were broadcast around the world on Thursday as a symbol of the unrelenting, indiscriminate suffering of Syria’s civilians.

“I’ve seen so many children rescued out of the rubble, but this child, with his innocence, he had no clue what was going on,” said Mustafa al-Sarout, an Aleppo-based journalist who filmed the video that has now gone viral on social media.

“He put his hand on his face and saw blood. He didn’t know even what happened to him.

“I’ve photographed a lot of air strikes in Aleppo, but there was so much there in his face, the blood and the dust mixed, at that age.” Dr Mohammad, a surgeon in Aleppo who declined to give his surname, treated the young Omran when he arrived at hospital. He was struck by how stunned the boy was. “He arrived in total shock, total bewilderment at what happened,” he said.

“His body was covered in dust in addition to blood on his face from a wound on his forehead, and the blood mixed with the dust. He was frightened and shocked. He had been sitting safely in his home, perhaps asleep,” he said. “And the house was brought down on top of him. When we were treating him, he was not screaming or crying, just in shock.”

Hours after he and his family were rescued, Omran was discharged from hospital, having suffered a head injury and bruises in the attack, but nothing too serious. His older sister and brother had been brought in the ambulance with him, while his father also emerged in the aftermath of the strike, his face covered in blood.

Sarout said he was surprised the video he filmed had met with such attention. The killing of children has become such a common feature of the war in Aleppo and the rest of Syria that those who document its brutality, day in, day out, are no longer surprised by what they see. “These are children bombed every day. It’s not an exceptional case,” he said.

“This is a daily fact of Russian and Syrian government air strikes. They take turns bombing civilians in Aleppo before the whole world. This child is a representative of millions of children in Syria and its cities.”

To many in the outside world, however, the footage has become a visceral reminder of Syrian children’s anguish, deprived of normality after five years of war. His is not the first image to have encapsulated the wretchedness of the Syrian war. Last year photographs of Alan Kurdi, a child lying dead on a beach in Turkey, brought home the huge risks taken by desperate refugees at sea.