Ali al-Nimr (20) participated in protests against the Saudi government 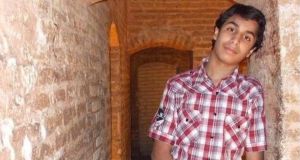 Ali al-Nimr’s father has appealed to the king for mercy after he lost his last high court appeal. Photograph: Facebook

International indignation is spreading over the apparently imminent beheading of a Saudi who has been imprisoned since participating in anti-government demonstrations at the age of 17.

A Saudi court sentenced Ali al-Nimr to be decapitated by a sabre-wielding executioner in a public square, and for his body to be publicly displayed on a cross until his flesh rots.

Al-Nimr, now 20, lost his last appeal to the Saudi high court in mid-September, and the sentence could be carried out at any moment.

According to Amnesty International, Saudi Arabia executed at least 2,208 people between January 1985 and June 2015, of whom 134 were killed this year.

The families of the executed are not notified in advance, and often learn of their loved one’s death only when the authorities ask them to collect remains.

Al-Nimr managed to telephone his family on September 23rd to tell them he was still alive. His father appealed this week to King Salman bin Adulaziz to spare his son.

Al-Nimr is a Shia Muslim from Saudi Arabia’s eastern province. Approximately two million of Saudi Arabia’s 18 million citizens are Shia, and they have long been subjected to discrimination.

Al Nimr’s family believe he was targeted because his uncle, Sheikh Nimr al-Nimr, led anti-government protests in 2011 and 2012. Rioting broke out after the sheikh was shot in the course of his arrest in 2012. He too has been sentenced to death.

It has escaped no one that decapitation and crucifixion are methods used by the extremist Islamic State, whereas Saudi Arabia is supposed to be an ally of the West.

“How can one express disgust at the absurdity of IS and remain silent when faced with the inhumanity of Saudi authorities?” Charles Consigny wrote in Le Point magazine.

“Why such complacency towards Saudi Arabia?” Pierre- Hervé Grosjean, an influential blogger and priest who specialises in ethical questions, asked on the opinion page of Le Figaro. “The double standard is more and more difficult to justify when such an ‘ally’ rivals with IS in horror.”

Le Monde suggested that, in the context of the wider Sunni-Shia war, Saudi authorities are attempting to compete with IS, which killed 21 Shia in a suicide bombing in a mosque in the eastern province in May.

The confirmation of the gruesome sentence on Ali al-Nimr has created all the more outrage because the Saudi ambassador to UN agencies in Geneva, Faisal Trad, was on September 21st confirmed as head of the “consultative committee” of the UN Human Rights Council.

A group of UN experts joined human rights groups in demanding that Al-Nimr’s sentence be commuted.

“Any judgment imposing the death penalty upon persons who were children at the time of the offence, and their execution, are incompatible with Saudi Arabia’s international obligations,” the group said, citing the UN Convention of the Rights of the Child, which Saudi Arabia ratified.