Opposition by Arab countries to Islamic State neither unified nor certain 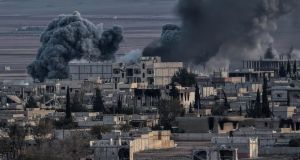 An airstrike from US-led coalition in the city of Kobani, Syria, in November. Islamic State laid siege to Kobani, in September. The fighting continues with most residents having fled but the city is being defended by the People’s Protection Units (YPG). Photograph: Aris Messinis/AFP/Getty Images

Last September nine Arab states agreed at a meeting in Jeddah to join the US-led military campaign against Islamic State jihadis in Iraq and Syria, but Arab participation remains minimal and lukewarm.

All 10 pledged to stand against all terrorism; take part in various aspects of the campaign; halt the flow of foreign fighters, funds and arms to jihadis; repudiate their ideologies; detain perpetrators and instigators, and contribute to relief and reconstruction efforts. The pledges have not been honoured.

At the time these commitments were extracted by Washington, Arab officials argued that the US had not formulated a coherent strategy for dealing with Islamic State other than aerial bombing and training local forces.

Nevertheless, the UAE, Jordan, Bahrain, Saudi Arabia and Qatar have mounted air strikes in Iraq but their contribution has been minimal.

The US has carried out 75-90 per cent of the missions, while its seven western allies have conducted most of the rest. In mid-October, the US stopped publicising the token Arab participation.

The absence of a coherent US strategy is not the only factor making Arabs reluctant partners. Arab governments are in two minds about the anti-Islamic State campaign.

They have already been targeted or fear being targeted by jihadis for participation. Saudi Arabia, the trend-setter, and its rival Qatar, have been key supporters of jihadi groups operating in Iraq and Syria.

In the view of Saudi and Gulf rulers, these groups, including Islamic State and al-Qaeda’s affiliate Jabhat al-Nusra, form a counterweight to Iran’s presence and influence in Iraq and Syria. Iran, rather than Islamic State, is seen as the primary enemy by these rulers.

To counter the export of the 1979 Shia Iranian revolution, Sunni Saudi Arabia has stepped up transmission to the region, Africa and Europe of its Wahhabi ideology through mosque construction, provision of preachers and funding of religious schools.

Riyadh will not take an aggressive anti-Islamic State stand because the monarchy cannot afford to antagonise its deeply conservative religious establishment, which adheres to the very doctrines espoused by Islamic State and other jihadi groups.

This is true to a lesser extent of Qatar, the only other Wahhabi state in the region. Tiny oil-and-gas rich Qatar also seeks to become a major power by promoting extremist groups.

Having refused to end its 2011 drive to overthrow the Assad government in Syria, Turkey has supported insurgent groups, facilitated the entry of foreign fighters into Syria and provided arms and training, sanctuary, staging areas and medicine to jihadis. From time to time, Ankara has made a show of sealing its border but this has been haphazard.

Iraq remains a major problem. Its army cannot contain and roll back Islamic State and the Shia fundamentalist-dominated government refuses to enlist Sunni tribesmen in the campaign. Instead, Baghdad has alienated Sunnis by failing to end discrimination, release prisoners and halt sectarian cleansing by Shia militiamen. Baghdad’s policies have prompted Sunnis to join Islamic in self-defence.

Washington has no plan for dealing with the Islamic State and jihadi threat to Syria other than to bomb it and train a limited number of “moderate” fighters in Saudi Arabia where they could be infected with Wahhabi doctrines. Riyadh, Ankara and their allies seek nothing less than the ousting of President Bashar al-Assad, whatever the consequences.