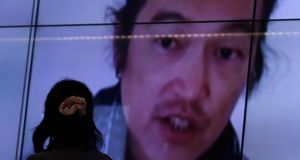 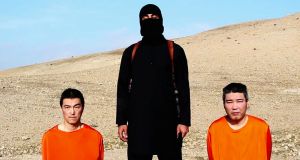 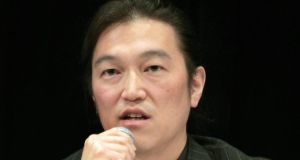 A file handout photo taken on October 27, 2010 and released by an international relief organization on January 21st, 2015 shows Japanese journalist Kenji Goto delivering a lecture during a symposium in Tokyo. The Islamic State group released a video on Saturday purportedly showing his beheading. Photograph: AFP/Getty Images 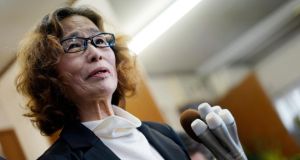 Junko Ishido, the mother of Kenji Goto, speaks to reporters at her home in Tokyo on Sunday after IS announced in a video that it had killed her son. Photograph: EPA

US president Barack Obama has led worldwide condemnation of the killing of a Japanese journalist by Islamic State (IS) militants, calling it a “heinous murder”.

He said the US stood in solidarity with the Japanese people in denouncing the “barbaric act”.

An online video released on Saturday purports to show the beheading of Kenji Goto. The White House said that while it was not confirming the authenticity of the video itself, it confirmed that Mr Goto (47) has been killed.

Mr Goto was captured in October while in Syria trying to win the release of a colleague who was reportedly killed earlier this month.

In his statement, Mr Obama called Mr Goto courageous and said the US applauded Japan’s steadfast commitment to advancing peace and prosperity in the Middle East as well as around the world.

He praised Mr Goto’s reporting, saying the freelance reporter “courageously sought to convey the plight of the Syrian people to the outside world”.

“On behalf of the Irish people I send my condolences to the family of Kenji Goto and to the government of prime minister Abe and the Japanese people,” said Mr Flanagan.

“Kenji Goto, like other victims of ISIS’ (IS) brutality, was devoted to helping the people of Syria and we must recall his bravery and humanity, while condemning utterly the depraved barbarity of his death.

“Ireland stands against the inhumanity of ISIS (IS) and its unspeakable outrages against the peoples of the Middle East and those humanitarian and media workers who place their lives at risk to assist the Syrian population.”

Statement by President Obama on the Death of Kenji Goto: pic.twitter.com/2AFw65jV1v

British prime minister David Cameron said: “I condemn what appears to be the despicable and appalling murder of Kenji Goto. It is a reminder that Isil (IS) is the embodiment of evil, with no regard for human life.”

The video, posted on militant websites, ended days of negotiations to save the man and heightened fears for the life of a Jordanian fighter pilot also held hostage. Japan reacted with outrage and horror.

“I feel indignation over this immoral and heinous act of terrorism,” Japan’s prime minister Shinzo Abe said after an emergency cabinet meeting. “When I think of the grief of his family, I am left speechless. The government has been doing its utmost in responding to win his release and we are filled with deep regret.”

He vowed that Japan would not give in to terrorism and would continue to provide humanitarian aid to countries fighting the IS extremists. “I was hoping Kenji would come back alive to thank everyone who had supported him,” Mr

“I am filled with sadness he couldn’t do it.” Mr Goto’s mother Junko Ishido said her son’s death showed he was a kind, gentle man, trying to save another hostage, Haruna Yukawa, who was shown as purportedly killed in an earlier video.

The fates of Mr Goto and the Jordanian pilot Lt Muath al-Kaseasbeh, had been linked by the militants, but Saturday’s video made no mention of the airman. Jordan’s government spokesman, Mohammed al-Momani, declined to comment.

Earlier this week, Jordan had offered to free an al Qaida prisoner for the pilot, but a swap never moved forward. The video, highlighted by militant sympathisers on social media sites, bore the symbol of IS’s al-Furqan media arm. Although the video could not be immediately independently verified, it conformed to other beheading videos released by the extremists, who now control about a third of both Syria and neighbouring Iraq in a self-declared caliphate.

The video, called “A Message to the Government of Japan,” featured a man who looked and sounded like a militant with a British accent known as Jihadi John, who has taken part in other beheading videos by IS.

Mr Goto, kneeling in an orange prison jumpsuit, said nothing in the roughly one-minute-long video. He was captured after he travelled to Syria in October to try to win Mr Yukawa’s release.

Mr Yukawa was reportedly killed previously, though authorities have yet to authenticate that video. Lt Kaseasbeh was captured after his fighter plane went down in December over an IS-controlled area of Syria.

Earlier this week, Jordan had offered to release an al Qaida prisoner for the pilot, but in a purported online message earlier this week, the militants threatened to kill him if the prisoner was not released by Thursday.

That deadline passed and the families of Lt Kaseasbeh and Mr

Later, the militants’ demand shifted to seeking the release of the al Qaida prisoner, Sajijda al-Rishawi (44) who faces death by hanging in Jordan for her role in triple hotel bombings in Amman in 2005.

Sixty people were killed in those attacks, the worst terror outrage in Jordan’s history. Rishawi has close family ties to the Iraq branch of al Qaida, a precursor of IS.