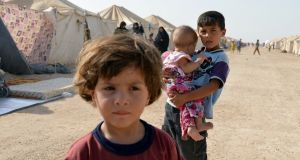 Displaced Iraqi children, who fled Falluja because of Islamic State violence, at a camp on the outskirts of the city this summer. Amnesty International says some of those fleeing Falluja were subjected to human rights abuses by security forces and Popular Mobilisation Units comprised of mainly Shia militias. Photograph: Reuters

In a 48-page report that uses an alternative name for Islamic State, Punished for Daesh’s Crimes, Displaced Iraqis Abused by Militias and Government Forces, the human rights advocacy group says “security forces and paramilitary militias have consistently . . . subjected Sunni Arabs” fleeing Isis-held areas “to arbitrary detention, torture, enforced disappearance and unlawful killing after capturing them or placing them in custody”.

Amnesty’s accusations, coinciding with the US-coalition-backed Mosul offensive against Isis, must be seen as a warning to Baghdad and its allies about potentially massive human rights violations against Mosul’s million civilians during and after the campaign.

These accusations focus on three periods this year: May to June following the liberation of the city of Falluja; late June to September during the drive to recapture al-Sharqat town; and current clashes around the cities of Hawija and Mosul.

Since killings and abuses have taken place in eight provinces with large Sunni concentrations, Amnesty concludes that human rights violations are both widespread and carried out with impunity by both security forces and Popular Mobilisation Units comprised of mainly Shia militias.

Isis atrocities, armed conflict and insecurity have led to the exodus of 4.2 million civilians from their homes, with some 3.4 million still displaced, Amnesty says. But their plight, it points out, does not end when they flee their homes, as civilians continue to risk snipers’ bullets and bombs as well as arrest and disappearance.

“Hundreds of thousands continue to live in dire conditions with insufficient or no access to essential services or medical care,” the Amnesty report states.

Camp dwellers, including women and children, cannot leave without permits and sponsors and are effectively imprisoned. A woman in the Kurdish region summed up the situation of thousands when she told Amnesty: “I am here in the camp with my four children..We fled from Daesh hoping for a better life, but now I am left with no husband, no home, and no money.”

Displaced males aged 15-65 are “subjected to opaque and flawed security procedures” by the Iraqi and Kurdish authorities, Amnesty also claims. “Thousands of men and boys . . . have been rounded up . . . on suspicion of links with [Islamic State].”

They are tortured, ill-treated, detained without judicial proceedings and coerced into signing “confessions” asserts Amnesty. Some are executed. One man cited by Amnesty was beaten for seven weeks “with metal rods and cables” before being transferred to Baghdad where he was freed without charge.

Government committees – often containing members of the security forces – established to investigate abuses are ineffective and results are not made public, the report states.

Amnesty has submitted documents on its findings, based on interviews with victims of violations and families of the dead and disappeared, to both Iraqi prime minister Haidar al-Abadi and the authorities in the autonomous Kurdish region. It said Baghdad did not reply; the Iraqi Kurds rejected the findings.