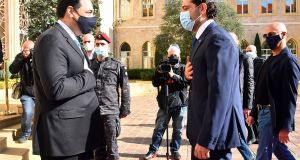 As Lebanon reels from political, economic and coronavirus crises, Beirut has sustained fresh challenges on all three fronts.

In a highly-controversial move caretaker prime minister Hassan Diab and three ex-ministers have been charged with negligence over the August blast that wrecked Beirut port and nearby neighbourhoods.

In singling out these individualsJudge Fadi Sawan has further undermined the credibility of the compromised judiciary by protecting key figures in the despised political elite. The accused could be jailed for up to seven years.

Warned shortly before the explosion of the danger posed by poorly stored ammonium-nitrate in the port, Mr Diab did nothing, following the example of three predecessors, who have escaped blame. President Michel Aoun (87) was also alerted but said it was not his business.

A total of 204 died and thousands were wounded and made homeless by the explosion.

A former university professor with no political clout, Mr Diab, a Sunni, is seen as a scapegoat. Sunni deputies rejected “the targeting of PM Diab alone”, saying he had been scapegoated because he was “not a sectarian lord”.

Two of the ex-ministers charged, Ghazi Zaiter and Ali Hassan Khalil, belong to the Hizbullah-allied Amal movement, and the third, Yousef Fenianos, to a Maronite Catholic party opposed to the president.

Prime minister-designate Saad Hariri has expressed solidarity with Mr Diab, while Hizbullah has rejected the charges.

When Mr Hariri presented a proposed list of independent expert ministers this week, Mr Aoun replied with a list of his own, exceeding his constitutional limits and assuming an executive role.

He is meant to be consulted on cabinet formation and can veto a line-up but cannot name ministers.

Mr Aoun has scuppered cabinet formation ahead of French president Emmanuel Macron’s visit to Beirut next week, by which time a new government was to have been appointed and begun implementing the French roadmap for rescuing Lebanon’s economy from collapse.

A former Lebanese minister told The Irish Times that Mr Aoun is using the indictment and his intervention to “expand his powers and prepare the way for the 2022 presidential election” and for his son-in-law, Gebran Bassil,to succeed him.

Mr Bassil is sanctioned by the US for links to Hizbullah.

Overcome by 2,000 daily infections and 12 to 20 deaths on top of 142,000 cases and 1,200 fatalities, Lebanon’s healthcare sector is struggling to cope without foreign funding.

Human Rights Watch deputy director Joe Stork has warned that “the Lebanese government’s failure to pay its bills to medical facilities seriously endangers the health of the population”.

“While politicians horse trade over a new cabinet the government is not responding to the desperate economic situation in the country, and the clock is ticking on the ability of many doctors and hospitals to treat patients.”

Due to the lack of foreign currencies, importers have reduced the flow of medications which are in short supply.