Opinion: US Jewish attitudes to Zionist state not as monolithic as some think 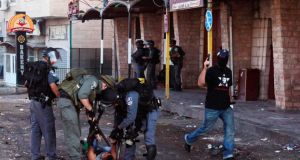 The late Mary Holland once explained to me why she had changed sides on the Israel-Palestine issue after spending just a few hours in the region. She had arrived as a supporter and admirer of Israel, looking forward to experiencing the ways in which people who had survived one of the most appalling atrocities in all of human history were gathering in their ancestral homeland to envision and create a state of their own.

As soon as you walked out of the hotel, she recalled, you could see something was terribly wrong. Arabs shrinking back on the pavements to allow Jews to pass, being literally, physically pushed out of their way if they didn’t move fast enough, and, worst of all in her account, the Arabs’ heads-down acceptance of it all.

My old political mentor, Tony Cliff, born Yigael Gluckstein, founder of the Socialist Workers’ Party, recounted a similar sort of epiphany. A teenage member of the socialist Zionist group Hashomer Hatzair in the 1930s, he discarded the Zionist component of his belief “in one go” after watching a group of Jewish settlers moving through a market in Haifa systematically pouring kerosene over the produce on display on Arab fruit and vegetable stalls.

Last week, Orla Devine, in her early 20s, from Greysteel in Co Derry, described (orladevine.wordpress.com) her first day as a volunteer with the Ecumenical Accompaniment Programme in Palestine and Israel: “Abed Abu Jawwad stands in front of the rubble of his home where he and his family were sleeping only hours earlier. At 7am that morning, whilst the children were still sleeping, seven Israeli military vehicles, one bulldozer and approximately 40 people from the Israeli authorities surrounded the land of Abed, and his son Mahmoud Abu Jawwad, in Humsa village and began demolishing both houses and four animal shelters before they had the chance to empty them of all their belongings.”

There is nothing particularly newsworthy in her account. We have all heard it all before. Between February and July this year, the UN Relief and Works Agency recorded 1,431 Palestinians displaced or affected by house demolitions. “The Israeli practice of demolishing homes, basic infrastructure and sources of livelihoods continues to devastate Palestinian families and communities in East Jerusalem and the 60 per cent of the West Bank controlled by Israel ... Many of the people affected already live in poverty, and demolitions are a leading cause of their ongoing displacement and dispossession in the West Bank.”

Settled hatred
Orla didn’t see anyone killed or seriously injured. Her blog (so far) doesn’t even include a third-person description of a killing or serious injury. That’s the point. It’s the routine nature of the incidents she recounts, as of the incidents that shifted the thinking of Mary Holland and Tony Cliff, that speaks most persuasively of the settled hatred that lies at the heart of Israel’s official ideology.

Tom Carew has been finding out more about all this than he will have been happy to learn. He has had it now from both sides. As chair of the Ireland-Israel Friendship League, Mr Carew has long been a target for denunciation by Irish supporters of the Palestinian cause. But now that he has spoken out against Israeli soldiers who roughed up a French diplomat and others bringing aid to Palestinian families whose homes had been demolished, he finds himself excoriated by Zionists as a liar out to damage Israel.

In fact, it is the sheer irrationality of the response to Mr Carew that does Israel damage. The same attitude has already had a significant negative effect on the way Israel is seen by millions previously minded to take their stand on the country’s side.

American Jews are regularly portrayed as a solid Zionist bloc exercising huge influence on US politics. This has never been the whole truth. The strongest elements of the US Israeli lobby are not Jews at all. And there is growing evidence of an unwillingness on the part of a rising generation of US Jews to stand up for Israel in all circumstances.

The Pew Research Centre this week published the results of the largest ever study of US Jewish attitudes. There was naught in it for the comfort of Binyamin Netanyahu.

American Jews
Fewer than half of US Jews believe the land that is now Israel was given by God to the Jewish people. Only 40 per cent have ever visited Israel; only half of these went back on a second visit. Only 38 per cent believe that the Israeli government sincerely wants a peace deal with the Palestinians. The percentage who believe that “caring about Israel” is essential to Jewishness stands at 42.

On the other hand, 56 per cent identify “working for justice and equality” as a necessary element of Jewishness.

Mr Carew was acting in Israel’s best interest in denouncing the assault on diplomats delivering aid to Palestinians. But Israel apparently cannot see that. Which will be the cause of its downfall in the end.