After a warning last month, Israeli forces fired on civilians in the village of Khuza’a 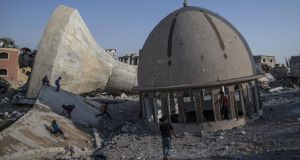 Palestinian children play in the ruins of a demolished mosque and water tower in Khuza’a, Gaza. Photograph: Dan Kitwood/Getty Images 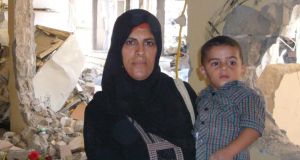 Sousan Najjar with one of her surviving children in the ruins of her house. Photograph: Lara Marlowe

If Palestinian president Mahmoud Abbas succeeds in his bid to take Israel to the International Criminal Court for war crimes in Gaza, investigators will doubtless visit Khuza’a, a village where 10,000 people lived, most of them from the Najjar and Qdeih families. At least 73 Palestinians were killed there in late July.

Khuza’a has been called the Ground Zero of the war. As you enter, the broken minaret of a destroyed mosque lies beside the road, facing the wreckage of a petrol station. The Israelis rolled over cars in their Merkava tanks. Some houses were crumpled by F-16 fighters, some gutted by tank shells, some blown up by ground troops.

On August 4th, Human Rights Watch (HRW) relayed reports that Israeli troops had opened fire on civilians in Khuza’a. In separate interviews, refugees gave consistent accounts of Israeli troops shelling civilian buildings, opening fire on and killing fleeing civilians and denying medical care to the wounded. The fact that Israel had earlier made general warnings that villagers should leave did not exonerate them, HRW said: “The failure of civilians to abide by warnings does not make them lawful targets of attack.”

A week after the ceasefire, some Khuza’a residents have returned to live in the ruins. They get three hours of electricity daily and fight to buy 20-litre jerry cans of water.

When the Israelis began shelling Khuza’a, Sousan Najjar (37), her husband and five children sought shelter with 80 neighbours in a large, ground- floor room, partly below street level. At dawn on July 25th, a tank shell crashed into the basement, killing two old men and wounding 15 people.

“There was panic. Everyone ran into the street,” she says. “The Israelis were shooting at us and bombs came from everywhere like rain. My husband was badly wounded in the head. He ran ahead of me, carrying Motassem. I saw Motassem’s head explode.”

Six-year-old Motassem had been asking who would take him to his first day of school.

“We were buying clothes and books for him,” says Najjar. A relative shows me a photograph of Motassem at his kindergarten graduation, wearing a mortarboard, clutching a diploma. He is a skinny, serious child.

“When we were in the shelter, Motassem was worried about me. He kept wiping my face with a damp cloth,” Najjar continues.

“With five children it’s difficult to give each one enough attention. If I’d known Motassem was going to die I would have given more to him.”

In the chaos that morning, Najjar screamed: “I want my son. Bring my son with me.” Neighbours convinced her to save herself and her other children. She placed Motassem’s body on a metre-high stack of tiles beside a house and tried to cover him with sand. The villagers waved white clothes as they began the trek to Khan Younis.

“I thought of my son every night,” Najjar says. “I thought: ‘Are you lonely? Are you cold? Did the dogs come to eat you?’ I had feelings I cannot describe.”

Motassem lay decomposing for nine days. When they returned, “The smell was terrible. His body was full of maggots. We wrapped him in a blanket and didn’t let Sousan see him,” says a relative.

Around the corner, Shehda Najjar (44) lies on a thin mattress on the floor, recovering from his war wounds. A tank shell exploded in his family’s kitchen and bathroom.

“The tank was in the street outside. They came in the house, shooting,” he says. “They said, ‘Take your clothes off and come out, one by one.”

He was hit in the jaw and arm by exploding bullets. He says the Israelis used some 30 villagers, including him, as human shields for nine hours. “I was bleeding. I kept asking for an ambulance. They made me kneel on the ground and put my hands behind my head. Eventually an officer came and asked, ‘What’s wrong with this guy?’ The soldier said, ‘We shot him by mistake.’ An hour later an ambulance arrived.”

“When I was bleeding, I told the soldiers: ‘I worked in Israel for 26 years, building your buildings.’ A soldier said: ‘We asked you to leave and you didn’t leave.’ I didn’t receive any warning. We live 1.5km from the border and I thought it would just be a few days, like the wars before. This is the worst war in my life... I don’t hate anyone. I just want a solution.”