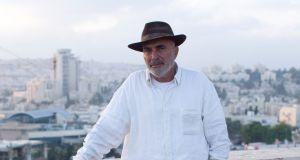 Israeli peace activist Ezra Nawi, who was arrested on Monday following comments he made in an undercover television documentary.

Israeli police arrested left-wing activist Ezra Nawi as he was trying to board a flight at Ben-Gurion international airport on Monday.

The arrest came after police launched an investigation in response to Mr Nawi boasting, in a secretly filmed documentary, that he helps the Palestinian security services locate and kill Palestinians who sell land to Jewish settlers.

Following the airport arrest police said Mr Nawi would be questioned on suspicion of conspiracy to commit a crime.

Mr Nawi (63), a member of the Ta’ayush (Coexistence) group, has for years worked with Palestinians in the West Bank, particularly with Bedouin in the southern Hebron hills, in struggles to prevent Jewish settlers taking over their land. He is a former partner of Senator David Norris.

The documentary was based on secretly recorded footage collected by right-wing infiltrators posing as pro-Palestinian activists.

The sale of West Bank land to Jewish settlers is punishable by death although such cases are rare as Palestinian courts prefer to hand down prison terms. However, a number of Palestinians who sold land to Jews have been murdered and the perpetrators have still not been brought to justice.

Reacting to the airport arrest, Knesset member Issawi Frej of the left-wing Meretz party accused the police of reacting with “amazing speed” when it came to arresting left-wing activists, but ignoring the “hundreds of crimes” committed every month by West Bank Jewish settlers.

Following the broadcast, left-wing commentators and human rights groups criticised Channel 2 and Ilana Dayan, the show’s host, a well-respected veteran documentary journalist. They claimed the programme was hijacked by the right wing as part of the ongoing campaign to delegitimise human rights groups.

Ms Dayan responded by maintaining the programme had no political agenda.