Military source says ‘terror site’ bombed is near Na’ameh, between Beirut and Sidon 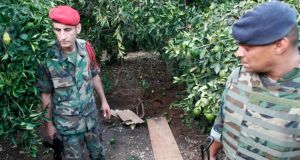 Lebanese soldiers stand near the area where rockets were launched from southern Lebanon into Israel, at Housh, Tyre, yesterday. Photograph: Ali Hashisho/Reuters

An Israeli military source said the “terror site” bombed was near Na’ameh, between Beirut and Sidon, but did not immediately provide further details.

Israel said yesterday’s rockets, which caused damage but no casualties, were fired by Islamic radicals.

It was the first air raid carried out by Israel on the area since the 2006 war between Israel and Lebanon’s militant Hizbullah group.

Ramez Mustafa, a Lebanon-based official with the Popular Front for the Liberation of Palestine-General Command, said the raid occurred at 4am local time, and caused no casualties or material damage.

He said the warplanes struck the coastal town of Na’ameh, 10 miles south of Beirut. The Palestinian group is active in the area and has a base there.

An Associated Press photographer in Na’ameh said the raid targeted a PFLP-GC base in a valley in the town. Lebanese troops in the area prevented journalists from reaching the base.

The firing of the rockets yesterday set off air raid sirens and startled a nation already on edge over turmoil across its borders in both Syria and Egypt.

No one was injured, and the military dismissed the attack as an “isolated incident”.

The Abdullah Azzam Brigades, an al Qaeda-inspired group based in Lebanon, claimed responsibility for the attack in a post on the Twitter account of Sirajuddin Zurayqat, a prominent Islamic militant leader.

It said the rockets were capable of flying 25 miles, putting the Israeli city of Haifa in its range. The group, designated a terrorist organisation by the US, has claimed responsibility for past rocket attacks on Israel.

The last serious clashes along the Lebanese frontier took place in 2010 when Lebanese and Israeli troops exchanged fire across the border, killing at least three people.