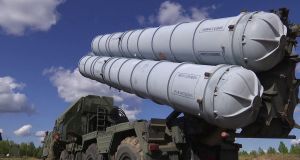 The Russian anti-aicraft missile system S-300, which it says it will supply to Syria in response to last week’s downing of a Russian military plane by Syrian forces during an Israeli attack. Photograph: EPA/Russian Defence Ministry

Israel and the United States have warned Russia against the transfer of an advanced air defence system to Syria in response to last week’s downing of a Russian military plane by Syrian forces during an Israeli attack.

“The transfer of advanced weapons systems into irresponsible hands will increase the dangers in the region,” Mr Netanyahu said.

Following an emergency meeting of the security cabinet on Tuesday, Mr Netanyahu vowed that Israel will continue to act to prevent Iran from entrenching itself militarily in Syria.

“We will do whatever is necessary to protect Israel’s security.”

He said he had agreed with Mr Putin that Russian and Israeli military officials will meet soon to discuss the continuation of the deconfliction mechanism.

The White House said it hoped Moscow would reconsider the move, which US national security adviser John Bolton called a “significant escalation”.

All 15 Russian servicemen on board were killed in the September 17th incident, when a Russian reconnaissance plane was shot down by Syrian anti-aircraft fire responding to an Israeli missile strike on a facility in Latakia.

Israel, which has carried out more than 200 strikes on Iranian-affiliated targets in Syria in the past two years, maintains close co-ordination with the Russian military in order to avoid a clash with Russian planes over Syrian territory.

But last week’s incident has raised tension between Moscow and Jerusalem and Russia’s defence minister said the decision to send the sophisticated S-300 missiles to Syria, along with other electronic warfare equipment, was made in response to Israel’s “disregard for the safety of Russian military personnel”.

Israeli pilots, he said, had intentionally manoeuvred near the Russian plane to shield themselves from attack by Syria, putting the Russian crew at risk.

Israel says its jets targeted a Syrian facility that held weapons for the Iran-backed Lebanese group Hizbullah, stressing it alerted Russia ahead of time as per deconfliction agreements.

According to the Moscow-based Izvestia daily newspaper, the first delivery of electronic warfare equipment arrived at the Russian air force base near Latakia on Monday.

The systems were intended to disrupt airborne radar, aircraft communication and controls and satellite navigation systems used in attack jets and drones.

It remains to be seen how the transfer of the S-300 system will impact on Israel’s ability to continue striking targets in Syria.

Amos Yadlin, a former head of Israeli military intelligence, said Israeli pilots’ freedom of the skies will continue. “Israel has been preparing for the S-300 threat for 20 years already and will know how to cope.”