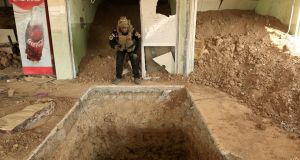 An Iraqi special forces soldier looks inside the entrance of a tunnel used by Islamic State militants in a restaurant in Bazwaya, east of Mosul, on Thursday. Photograph: Zohra Bensemra/Reuters

Since Iraqi and Kurdish forces began their mid-October campaign to liberate the northern Iraqi city of Mosul from Islamic State, the jihadis have responded with terror, obstruction and diversion.

Scores of villagers living near Mosul have been rounded up and used as human shields to dissuade the Iraqi army and its allies from targeting retreating Islamic State fighters.

Soon after the launch of the operation to retake Mosul, militants reportedly seized 500 civilians and executed 284 men and boys to warn civilians against collaborating with the US-led coalition.

According to the UN, jihadis have fired upon civilians fleeing towards the Syrian border and Iraqi army and Kurdish militia lines.

Well dug in, surrounded by roadside bombs, mines, berms, tunnels and trenches, Islamic State fighters have blown up bridges over the Tigris river to hinder the progress of the attacking forces and to trap civilians. Oil wells have been set alight, filling the air with thick black smoke to choke attackers and make visibility difficult.

A week ago, the group – also known as Isis – set fire to a sulphur plant south of Mosul near the Qayyara base hosting units of the Iraqi army and US special forces. Two people died and hundreds were treated for breathing problems due to toxic sulphur dioxide fumes, revealing Islamic State’s intention to use local industrial sites as weapons of war.

Islamic State activated sleeper cells in Kirkuk as fighters blasted a broad swathe across the city, killing 99 civilians with the loss of 63 jihadis. Clashes continued for two days. Kurdish militiamen mopped up the jihadis and expelled Sunni Arab civilians, who had taken refuge in Kirkuk, on suspicion they support Islamic State.

Last Saturday, Islamic State demonstrated its long reach by mounting an attack 664km from Mosul and capturing the centre of the strategic town of Rutba, straddling the Amman-Baghdad highway, a main artery for imports of food and other goods. Suicide bombers killed 70 Iraqi troops while dozens of jihadis were said to have died. Occupied by Islamic State in 2014, Rutba had been regained by government forces in March this year.

In response to the Kurdish recapture of Bashiqa and Qarakosh, two towns near Mosul. Islamic State attacked the city of Sinjar, 127km west of Mosul. The assault was repulsed by the Kurds, who cannot afford a second defeat at Sinjar. Soon after seizing Mosul in June 2014, Islamic State drove Kurdish fighters from Sinjar, massacred hundreds of Yazidi men and enslaved several thousand women and children

Islamic State’s aim is to delay the urban confrontation in Mosul between up to 8,000 defenders and 30,000 attackers and inflict major damage on advancing forces, handicapped by the presence of civilians still in the city. This strategy indicates Islamic State intends to fight for Mosul rather than flee to Raqqa, its capital in Syria.