Re-education, with the object of depriving the cult of its spiritual force, is the key to countering the militia 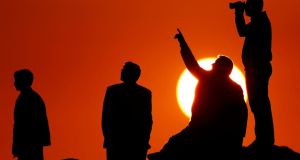 Turkish Kurds watch the Syrian town of Kobani from the Turkish-Syrian border in the southeastern town of Suruc in Sanliurfa province at the weekend. Photograph: Kai Pfaffenbach/Reuters

US secretary of state John Kerry denies that the bombing campaign against Islamic State fighters in and around the small, dusty Syrian Kurdish town of Kobani near the Turkish border defines coalition strategy. He argues the primary focus of the US military is on Iraq, but his words are belied by targets currently under attack.

US aircraft have carried out dozens of strikes on Islamic State units at Kobani but no air action has been taken as fighters have skirmished with Iraqi forces around Ramadi, an hour’s drive from Baghdad.

Half held by Islamic State, Ramadi is the capital of strategic Anbar province, bordering on Syria, Jordan and Saudi Arabia.

Ramadi is a far more important strategic objective than Kobani, but the US fears Kobani’s loss more because the battle is being played out on television screens across the world. Washington cannot suffer a propaganda defeat in Syria even though Islamic State forces advance in Iraq.

In one of his most oft-quoted maxims, Napoleon stated: “In war the spiritual is to the material as three to one.” The loss of Kobani would also be a major “spiritual” or moral defeat the US cannot afford in its faltering and one-dimensional bombing campaign against Islamic State.

More than military prowess, Islamic State relies on “spiritual” clout with adherents, admirers and, even, antagonists, for millions of Muslims living in failing states long for the purity and security of an “Islamic state”, even the version imposed by the brutal and narrow militia.

Islamic State is not just one of the host of insurgent groups fighting the Syrian and Iraqi governments. It is not a network, like al-Qaeda, not a movement, not an organisation. Islamic State is a cult which relies on the “spiritual” dimension to fire its fighters.

It is the world’s most well-organised and heavily armed cult, making it far more formidable than the entire range of militias involved in the struggle for Syria and Iraq.

Core Islamic State fighters are converts to the cause of establishing a utopian Islamic state ruled by Muslim canon law, Sharia. They are imbued with a powerful “purist” ideology based on the teachings of 18th-century ultra-conservative Saudi preacher Mohamed Ibn Abdel Wahhab.

Consequently it attracts alienated and angry youths, cranks and criminals, drug addicts and derelicts, psychotics and psychopaths, as well as true believers and opportunists.

As long as Islamic State retains the offensive, maintains control of some territory and sustains its state-of-the-art social media campaign to recruit foot soldiers, secure financial supporters and win Muslim hearts and minds, the cult will remain a serious threat to the very existence of Syria, Iraq and neighbouring states. If not contained, it could destabilise countries further afield where there are Muslim majorities and minorities.

For example, far from the Syrian and Iraqi battlegrounds, the Filipino fundamentalist insurgent group Abu Sayyaf – which has proclaimed fealty to Islamic State – released a German couple, Stefan Okonek and Henrike Dielen, held for six months after a ransom of $5.6 million (€4.4 million) was paid. Mr Okonek had been threatened with beheading.

The rise of Islamic State is the final stage of a process of arming jihadis imbued with the narrow puritan Wahhabi ideology promulgated by Saudi Arabia for half a century. This began when the US and Saudi Arabia created the mujahideen (holy warriors) to fight the Soviet army in Afghanistan.

A leading figure in this campaign, Osama Bin Laden, founded al-Qaeda with the aim of freeing his Saudi homeland from its pro-western rulers and liberating Palestine. His lieutenant, Abu Musab al-Zarqawi, another veteran of the Afghan war, established al-Qaeda in Iraq during the US occupation and staged bombings against US and Iraqi forces, kidnappings and beheadings in Iraq. Al-Qaeda in Iraq was the parent not only of Islamic State but also of Jabhat al-Nusra, its main rival among a host of fundamentalist factions.

Islamic State and various fundamentalist factions have become assertive in the wake of the 2011 Arab Spring, which caught the imagination of Arab and Muslim youth everywhere.

When the 18-day mass freedom movement born in Cairo’s Tahrir Square was crushed during military and Muslim Brotherhood rule, some Arab idealists turned to radical fundamentalism, the enemy of democracy and freedom.

The chief strategy for countering Islamic State is not bombing but re-education, with the object of depriving the cult of its spiritual force. This could be a long drawn-out process but Arab and Muslim alienation that prompts youth to join Islamic State could be reduced in the short term if the US and its western allies dealt justly with Palestine, promoted democracy in Arab and Muslim countries and encouraged investment in education, health and jobs.