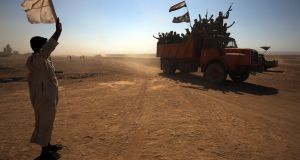 An Iraqi man waves a white flag as Iraqi forces and fighters from the Hashed al-Shaabi advance towards the Islamic State stronghold of Hawija. Photograph: Ahmad al-Rubaye/AFP/Getty Images

The Syrian Observatory for Human Rights reported on Sunday that Islamic State fighters had seized control of the town of al-Qaryatayn in Homs province, part of a wider counterattack by the jihadists as they resist a fierce offensive in eastern Syria.

There was no comment from the Syrian army on the report that Qaryatayn, 120 km (70 miles) northeast of Damascus, had fallen. Syrian government forces recovered Qaryatayn from Islamic State some six months ago.

The Observatory said Islamic State fighters had seized control of Qaryatayn in a surprise attack launched after its fighters had infiltrated the town.