Henning, 47, a taxi driver from Eccles, Greater Manchester, had been held captive in Syria for nine months 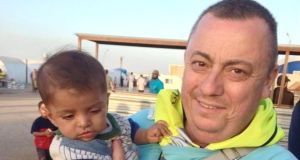 Undated file family handout photo of Alan Henning the British aid worker as a video apparently showing the beheading of the British hostage who was kidnapped by IS militants, was released. Press Association

A video apparently showing the beheading of British hostage Alan Henning was released on the internet last night by Islamic State militants.

The footage appears to show the 47-year-old aid worker, who was kidnapped last December in Syria by IS militants, kneeling beside a militant dressed in black in a desert setting.

The one-minute, 11-second video, titled “Another Message to America and its Allies,” showed the British aid worker introducing himself, said the SITE Intelligence Group, which monitors jihadist groups.

The video appears to show Mr Henning say: “I am Alan Henning. Because of our parliament’s decision to attack the Islamic State, I, as a member of the British public, will now pay the price for that decision.”

The man dressed in black, who speaks with a British accent, then makes a direct statement to prime minister David Cameron: “The blood of David Haines was on your hands Cameron. Alan Henning will also be slaughtered, but his blood is on the hands of the British parliament.”

The video then apparently shows the militant alongside former American soldier Peter Kassig. The militant says: “Obama, you have started your aerial bombardment in Sham [Syria], which keeps on striking our people. So it is only right that we continue to strike the necks of your people.”

In a statement last night, Mr David Cameron, condemned the video: “The brutal murder of Alan Henning by Isil shows just how barbaric and repulsive these terrorists are. My thoughts and prayers tonight are with Alan’s wife Barbara, their children and all those who loved him,” he said.

“Alan had gone to Syria to help get aid to people of all faiths in their hour of need. The fact that he was taken hostage when trying to help others and now murdered demonstrates that there are no limits to the depravity of these Isil terrorists. We will do all we can to hunt down these murderers and bring them to justice.”

Mrs Henning revealed she had received an audio message of her husband pleading for his life, and had been told that a Sharia court had found him innocent of being a spy.

She told BBC News: “We are at a loss why those leading Islamic State cannot open their hearts and minds to the truth about Alan’s humanitarian motives for going to Syria and why they continue to ignore the verdicts of their own justice system.

“Surely those who wish to be seen as a state will act in a statesmanlike way by showing mercy and providing clemency. I ask again, supported by the voices across the world, for Islamic State to spare Alan’s life.”

If the video is found to be authentic, Henning will be the fourth western hostage to have been killed by the group, following the video-taped beheadings of US journalists James Foley and Steven Sotloff, and Scottish aid worker David Haines.