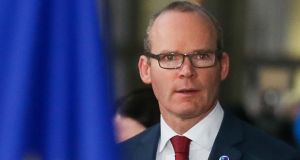 Ireland may host a meeting of Arab and European foreign ministers aimed at relaunching the Middle East peace process as early as January 2019, officials travelling with Tánaiste and Minister for Foreign Affairs Simon Coveney said on Wednesday.

Mr Coveney was in Paris to discuss Brexit and the Israeli-Palestinian conflict with French foreign minister, Jean-Yves Le Drian.

“We have a very similar view and approach towards supporting and progressing the peace process,” Mr Coveney said. “I hope you will see Ireland and France work together to introduce some new thinking and new initiatives into that question.”

“We have convergent analyses and are developing shared ambitions,” Mr Le Drian said. “We are determined to keep peace in the Middle East on the international agenda.”

The peace process has been virtually dead since the former US secretary of state John Kerry gave up attempts to mediate in 2014. The previous French administration convened international conferences in June 2016 and January 2017. Israel boycotted both meetings.

“Ireland played an active role in the international conferences,” Mr Le Drian said. “It is not only useful but necessary that we continue to work together.”

The conference in Ireland would be at foreign minister level and would probably be held over a weekend in Dublin, Mr Coveney’s entourage said. It is understood that the foreign ministers of France, Egypt and Palestine would be among participants.

An adviser said the request came from the Palestinians.

It was “probably too early to talk definitively” about the Dublin conference, Mr Coveney said. “But that has been part of the conversation we just had.”

Mr Coveney has travelled to Israel-Palestine three times in 13 months and is “extremely passionate” about resolving the conflict, his spokesman, Chris Donoghue said. “It’s one of his top foreign policy objectives. The plight of the Palestinian people is deeply understood in Ireland.”

“Trade is an EU competency,” he said.

Observers believe that Senator Black’s Bill has put pressure on the Government to show other ways of supporting the Palestinians.

Mr Coveney has also mentioned the possibility of reviewing policy on official recognition of Palestine. The Government’s position is that recognition should be part of a negotiated settlement, and in co-ordination with the European Union.

But a settlement looks impossible in the near future, and central European countries allied with Israel could be expected to veto recognition by the EU.

“I said that if that peace settlement looks like it is not materialising and there is no prospect of making progress on that, Ireland would have to look at ways in which we could reinforce . . . a two-state solution . . . I still stand over these comments,” Mr Coveney said.

Mr Le Drian noted that France and Ireland had been waiting for “an American peace plan” that was promised by President Donald Trump but which has been slow in coming. “Our discussions covered our shared capacity to make proposals if the peace process broke down,” he said.

France and Ireland are jointly financing a €12 million solar power plant in the Gaza Strip. In recent weeks, Ireland backed a French legal case against Israel in the European Court of Justice that would require Israel to label exports to Europe so that it is clear when merchandise comes from settlements on occupied land.