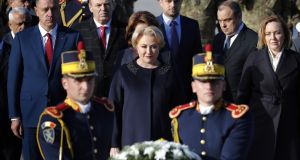 Romanian PM Viorica Dancila, surrounded by her cabinet members, as they pay their respects for dead soldiers at the Unknown Soldier Memorial in Bucharest, Romania, on October 25th. Photograph: Robert Ghement/EPA

Romanian prime minister Viorica Dancila has called for a “truce” between her government and its opponents, in response to fears in Brussels that the country’s deep political divisions could harm its EU presidency next year.

Since taking power in early 2017, the government led by the populist Social Democrats (PSD) has sought to overhaul Romania’s criminal justice system and decriminalise certain graft offences. It also forced the president to sack the country’s top anti-corruption prosecutor and is now targeting the prosecutor general.

Critics say the reforms benefit powerful members and supporters of the scandal-plagued PSD, and they have triggered the biggest street protests seen in Romania since its 1989 anti-communist revolution, including a rally in August during which about 450 people were hurt in a violent crackdown by riot police.

The European Union and United States have raised serious concerns over the reforms, and Brussels still conducts special monitoring of Romania’s judicial system and anti-corruption efforts, 11 years after it joined the bloc.

“This truce was requested by the European Commission president Jean-Claude Juncker,” Ms Dancila said of plans for Romania’s six-month EU presidency, which starts in January.

“We need to follow the example of other member states that showed that, when one holds the presidency . . . there is a need for consensus, for calm, for political disputes to take second place so we can focus on the national interest,” she told parliament in Bucharest on Tuesday.

“This is an exam that Romania must take, and when I say ‘Romania’ I don’t mean the PSD [and its allies]; I think we have to apply this to the whole political class and we need to show more wisdom and more interest in Romania’s goals.”

Government critics say a key beneficiary of its judicial reforms could be PSD leader Liviu Dragnea, who cannot serve as premier after being found guilty of vote-rigging and is now fighting a recent conviction for abuse of office.

Ms Dancila said she had not discussed the idea of a truce with Mr Dragnea, but believes he would back it as “a politically experienced man who knows the importance of consensus during the presidency of the EU Council”.

The EU fears Romania’s backsliding on corruption shows it is going the way of Hungary and Poland, which are already facing legal action from Brussels over moves by their populist governments to weaken the rule of law.

Last Friday, EU justice commissioner Vera Jourova said that “the independence of Romania’s judicial system and its capacity to fight corruption effectively are of paramount importance for us”.

The running of the EU presidency “is a very demanding discipline”, she added, noting that Romania’s “situation in justice and prosecution is the complicating factor, which I have concerns about.”